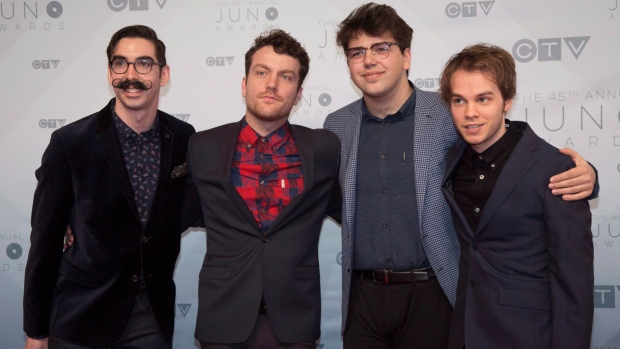 TORONTO - Canadian pop-rock band the Elwins say they've decided to break up as the COVID-19 pandemic continues to challenge the future of touring life.

The Newmarket, Ont.-founded quartet announced the news on social media saying it “feels like the right way forward” after more than a decade of making music together.

Drummer Travis Stokl tells The Canadian Press the call was made after band members agreed it was “tough to make a living” with the pandemic dragging on and venues across the country facing ever-changing capacity restrictions.

He says the band had hoped to wait out the lack of touring by delaying their 2020 album “IV” for more than half a year.

But after plans for a North American tour were quashed he says the Elwins had to decide as a group how they would approach what they considered an “unforeseeable future.”

The Elwins rose to prominence with their 2012 full-length debut “And I Thank You” and delivered a number of indie-rock hits, including “Hey! Ya You” and “So Down Low.” They were also nominated at the 2016 Juno Awards for breakthrough group of the year.

Touring became their bread and butter over the years as they fostered a loyal fan base across Canada.

Stokl says the Elwins have survived the past two years largely on money they earned before the pandemic, government support and the generosity of their family members.

“There was definitely some money in the bank to coast on, as it were,” he says.

“But I personally, don't think we could have survived another year and a bit on what we have.”

He says several of the Elwins' members, including himself, plan to put out music separately from band in the near future.