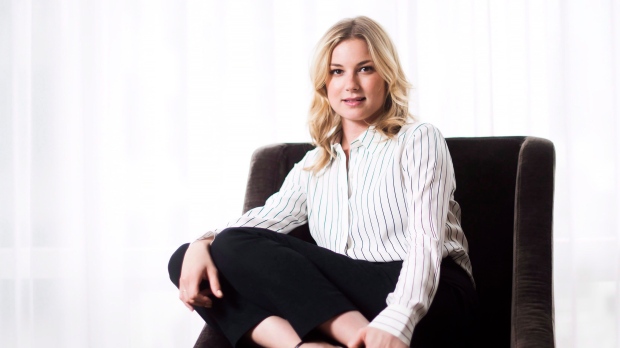 TORONTO -- Canadian actor Emily VanCamp had the help of another Canuck woman as she joined the Marvel superhero series "The Falcon and the Winter Soldier."

The Port Perry, Ont.-born star says the Disney Plus show's Toronto-based director, Kari Skogland, has been instrumental in helping her reprise and flesh out her role as deadly operative Sharon Carter.

"I remember when I first met Kari, it was right before we started shooting and we had dinner together; had a couple glasses of wine, and it was just like chatting with an old friend," VanCamp said in an interview.

"I just felt very comfortable in her hands. Having that female energy as well, within a Marvel show, is fantastic. And I think she really brought that sensibility. It was nice to have that sort of comforting presence."

Sharon first appeared in last week's episode of the series, which stars Anthony Mackie as Sam Wilson, a.k.a. The Falcon, and Sebastian Stan as Bucky Barnes, a.k.a. The Winter Soldier.

The former S.H.I.E.L.D. agent is in a much darker and jaded place than when fans last saw her in 2016's "Captain America: Civil War."

She's now on the run after being named an enemy of the state by the United States government, doesn't speak with her family and is selling stolen artwork on the lawless fictional island nation of Madripoor.

When Sam and Bucky ask for Sharon's help in solving an international crisis, she agrees with the promise that she'll get a pardon out of it and get her life back.

Helping the trio is the villainous Zemo, played by Daniel Bruhl -- but he might not be the only evil member of the group.

Sharon is also showing an enigmatic nature and many fans are wondering whether she might be a criminal ruler known as the Power Broker.

"There are so many possibilities and so many things that could potentially be brewing there that we don't see," said VanCamp, star of the Fox medical drama series "The Resident" who rose to fame on series "Everwood," "Brothers and Sisters" and "Revenge."

"There's a chip on her shoulder, and you definitely see that she's not the same Sharon that we knew. But what that means is yet to be seen."

VanCamp said she was surprised when she was asked to return to the Marvel Cinematic Universe as Sharon, some five years after essentially saying goodbye to the character.

"I think many of us thought 'OK, well, that was just sort of the end for Sharon. And we'll never really know what happened,"' she said. "And the idea of finding out what happened was very intriguing to me."

She loved being able to redefine the role, independent of Captain America and the world of the movies.

"There's still more to unpack even after this series is finished," VanCamp said. "But Kari was amazing in really bringing out that inner turmoil and that depth in each character."

She was also drawn to the show's bigger themes, from racism to trauma.

"I think people will be really inspired by it," said VanCamp. "In the grand scheme of what this show represents, it's amazing."

Sharon also gets a lot more physical in the series compared to the films.

VanCamp had a stunt double but also did many of her own fight sequences and trained for months to learn the scenes, many of which were shot as one long take.

"I definitely put the body through the wringer a little bit over those several months, but it was worth it," she said.