Canadian men started at the bottom, now they're in Qatar with Drake as soundtrack 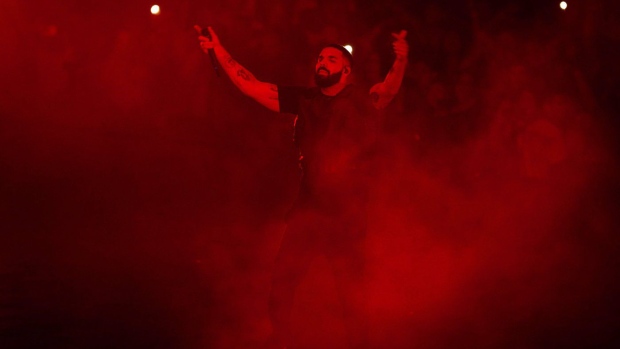 Drake performs during the "Aubrey & The Three Amigos Tour" in Toronto, Tuesday, Aug. 21, 2018. It was no coincidence that Canada took the field for warmups prior to its World Cup opener against Belgium to the sounds of Drake's "Started From the Bottom." THE CANADIAN PRESS/Mark Blinch

DOHA, Qatar - It was no coincidence that Canada took the field for warmups prior to its World Cup opener against Belgium to the sounds of Drake's “Started From the Bottom.”

It was part of the Canadian men's playlist in returning to the soccer showcase after a 36-year absence.

Countries provide FIFA with a suggested soundtrack for their games at the World Cup. Canada also has its own MC, Canadian sportscaster Brendan Dunlop, to introduce the Canadian players.

Canadians in the crowd at Ahmad Bin Ali Stadium responded to the introduction with a tsunami of cheers Wednesday. The 2013 Drake song also promoted a raucous reaction in the crowd of 40,432.

Given the Canadian men's recent rise in the soccer world, the Drake song strikes a chord.

The day after, defender Kamal Miller was asked who chose “Started From the Bottom.” While not certain, he suggested Canadian star Alphonso Davies.

“I don't really know. Probably Fonzie. He and Drake have got a little thing going on,” he said. “So it was probably Fonzie's decision.”

“I didn't know it was happening,” Miller said of the choice of walkout song. “But when I heard the song, it kind of all resonated with the moment - the fact that we're a team that really did start from the bottom so the lyrics fit in with the occasion. And it felt right and got us going for the game.”

For a Canadian team that ranked 73rd in the world when it started World Cup qualifying in March 2021 with a 5-1 win per Bermuda, the lyrics fit. The Canadian men have been as low as No. 122 on the world ladder, back on October 2014.

They rose up the rankings in a World Cup qualifying campaign that saw them go 14-2-4 over three rounds, topping CONCACAF powerhouses Mexico and the U.S., to finish atop the final round - an eight-team round-robin - with an 8-2-4 record that included a loss in Panama after Canada had secured World Cup qualification.

The reference to the Drake song continued Saturday at Canada's news conference before Sunday's game against No. 12 Croatia at Khalifa International Stadium.

“There were times where playing Bermuda was so exciting. And now it's Croatia,” said Canadian midfielder Stephen Eustaquio. “So it is what it is. That's part of our journey.

Drake dropped into the Canadian team's hotel in Toronto in October 2021 after a 4-1 win over Panama in World Cup qualifying that saw Davies score a spectacular solo effort goal.

“I've listened to Drake ever since I started listening to music. Drake is one of my idols. I love all his music,” Davies said later.

There is also a soccer reference to “Started From the Bottom,” with the video starting with footage of a young boy playing soccer - and scoring - under a bubble in Toronto. The video then cuts to an adult Drake standing in a Bentley convertible and singing, before showing him working with friends in a pharmacy.

The video ends with Drake and his crew on top, partying in a luxurious waterfront property in the Dominican Republic.

Was the song Davies' choice? Canada Soccer has not made the 22-year-old Bayern Munich star available to the Canadian media since he arrived in Doha, although he did do an interview with TSN.