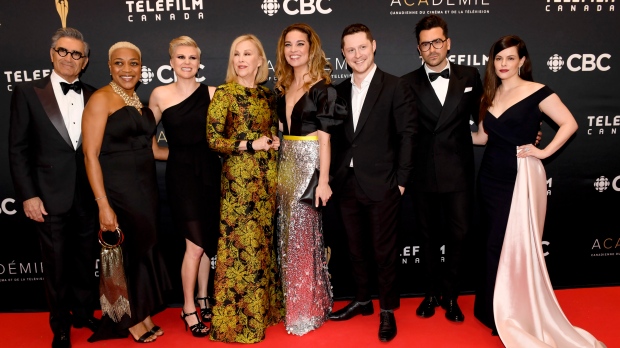 Cast members of "Schitt's Creek" pose on the red carpet at the Canadian Screen Awards in Toronto on March 31, 2019. The smash Canadian comedy series "Schitt's Creek'' has won its first Emmy Award. Actor Eugene Levy, one of the co-creator's of the show, congratulated John Comerford and Lisa Parasyn for winning the Emmy for Outstanding Casting For a Comedy Series. THE CANADIAN PRESS/Nathan Denette

Actor Eugene Levy, one of the stars and co-creator's of the show, congratulated John Comerford and Lisa Parasyn on Twitter for winning the Emmy for Outstanding Casting For a Comedy Series.

"Schitt's Creek" began on CBC, Pop TV and later Netflix before becoming a global phenomenon, with countless kudos for the story of the formerly wealthy Rose family adjusting to a humble life in a small town the dad once bought as a joke.

Levy's son Daniel, another star and a co-creator of the show, also gushed about the Emmy win, saying "I AM SCREAMINGGG," as he congratulated Comerford and Parasyn in a tweet.

"CONGRATULATIONS to John Comerford and Lisa Parasyn for winning Schitt's Creek's FIRST EMMY for Outstanding Casting For a Comedy Series!!," Eugene Levy said in a tweet. "So well deserved!!!"

The show wrapped up in April after six seasons.

This report by The Canadian Press was first published on Sept. 17, 2020