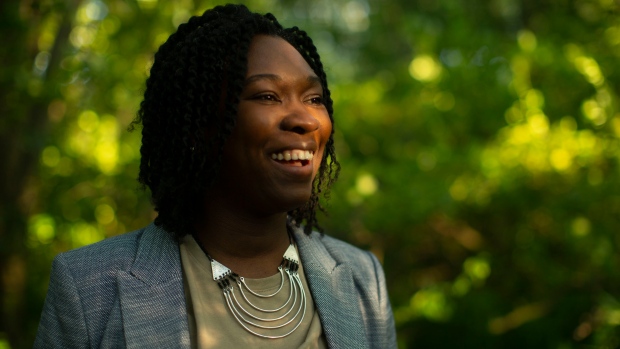 TORONTO - Canisia Lubrin has been named this year's Canadian winner of the Griffin Poetry Prize.

The Whitby, Ont.-based writer received $65,000 honour at a virtual ceremony Wednesday for “The Dyzgraphxst,” from McClelland & Stewart.

In their citation, jurors hailed Lubrin's sophomore collection as “a spectacular feat of architecture called a poem.”

Structured in seven acts, “The Dyzgraphxst” uses different iterations of “I” to deconstruct selfhood as it exists in relation to the modern conceptions of individualism, colonialism and meritocracy.

The international prize, also worth $65,000, went to Belarusian poet Valzhyna Mort for “Music for the Dead and Resurrected,” from Farrar, Straus and Giroux.

The Griffin is billed as the world's largest prize for a first-edition single collection of poetry written in or translated into English.

Lubrin's win bolstered her status as a powerful voice in Canadian poetry.

Earlier this year, Lubrin was selected as one of eight winners of the Windham-Campbell Prize, which is administered through Yale University, and provides US$165,000 for each recipient to focus on work “independent of financial concerns.”

She also became McClelland & Stewart's poetry editor in April, with her duties including acquiring and editing five collections each year.

Lubrin emerged as a wordsmith-to-watch with her 2017 debut book of poetry, “Voodoo Hypothesis,” a subversion of the imperial construct of “Blackness” expressed through an intricate blend of Caribbean Creole, English patois and baroque language.

“The Dyzgraphxst” has been making the rounds on the awards circuit, earning spots on the short lists for the Governor General's Literary Award for Poetry and the Trillium Book Award for Poetry.

The title also won the OCM Bocas Prize for Caribbean Literature, an annual award for literary books by Caribbean writers, and was picked as one of the best books of 2020 in a contributors' edition of the Paris Review.

A writer, critic, editor and teacher, Lubrin was born and raised in Saint Lucia, and holds degrees from York University and University of Guelph.

She teaches creative writing at OCAD University and poetry at the University of Toronto. She has held writing residencies at Queen's University and Poetry in Voice, an organization that aims to bring poetry into the high school classroom.

The other Canadian contenders on this year's Griffin short list were Joseph Dandurand for “The East Side of It All” and Yusuf Saadi for “Pluviophile,” both published by Nightwood Editions.

The international runners-up were: Los Angeles-based poet Victoria Chang for “Obit,” from Copper Canyon Press; Indian-American writer Srikanth Reddy for “Underworld Lit,” from Wave Books; and Tracy K. Smith and Changtai Bi for their translation of poet Yi Lei's Chinese work “My Name Will Grow Wide Like a Tree,” from Graywolf Press.

The Griffin Trust was founded in 2000 by Scott Griffin, along with trustees Margaret Atwood, Robert Hass, Michael Ondaatje, Robin Robertson and David Young.