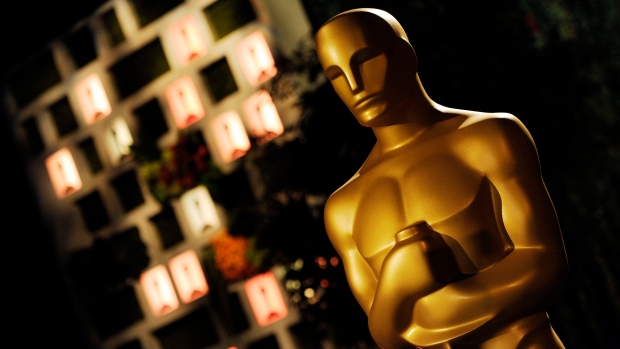 An Oscar statue is pictured at the Governors Ball Press Preview for the 86th Oscars, on Thursday, Feb. 20, 2014, in Los Angeles. (Chris Pizzello/Invision/AP)

TORONTO -- The top Oscar trophies have yet to be handed out, but Canada can already lay claim to one of the most decorated -- albeit lesser known -- Academy Award winners of the year.

Software engineer Eric Veach nabbed two prizes at a recent gala to recognize behind-the-scene experts who make movie magic possible, and days after receiving a plaque and a certificate from presenters Kristen Bell and Michael B. Jordan he says he still can't believe it.

"It just seemed incredible to me that something like this would ever happen," Veach says when reached recently at a ski resort north of Kamloops, B.C., where his family vacationed following the Los Angeles bash.

"This is for work that is 15 years old but is essentially having an impact now. For me, it just seems like this is an incredible bonus. I've been doing nothing in graphics for 15 years and then the next thing you know the Academy is calling me up and wants to talk to me about my thesis work."

On Feb. 15, he was among 52 people recognized for 19 scientific and technical achievements by the Academy of Motion Picture Arts and Sciences, which also hands out the Oscars.

The Sarnia, Ont.-born computer whiz studied math at the University of Waterloo and got a PhD in computer science from Stanford University.

That's where he figured out how best to simulate the way light bounces around an environment. Movie studios took note and used it to produce more realistic computer graphics, which rely in large part on the way light is depicted.

"Your eye really picks up when the lighting isn't correct," notes Veach, who now lives near Seattle and works for Google.

He says the trick is in accurately simulating indirect illumination -- light that bounces and reflects from one object to another, such as under a table or along the edges of a super hero's cape.

Years ago, such tweaks would have been handled manually or required many expensive computers, says Veach, who received a scientific and engineering award plaque for the research.

"It's only just recently that computers have gotten fast enough that rather than having artists spend all their time just trying to make things look realistic, a lot of studios have now decided that it's cheap enough (to) simulate the actual physics," he says, adding this gives artists more time to focus on the artistic side of their work.

After graduating from Stanford, Veach worked at Pixar Animation Studios just outside San Francisco from 1998 to 2000. While there, he and colleague Tom Lokovic worked together on the problem of creating realistic hair and fur for the animated hit "Monsters, Inc."

"To make it look realistic you need to have very accurate shadows," he says of the work, which earned the duo technical achievement award certificates from the academy.

Their work was later widely adopted as the foundation of early deep compositing, a method of smoothly combining three-dimensional layered elements such as spaceships, explosions and live action into one image.

Although sci-tech winners receive certificates or plaques instead of the more well-known Oscar statuettes, Veach says the bash is still considered a tremendous honour in the sci-tech community.

"This is the 'sciences' part of the Academy of Motion Picture Arts and Sciences and you know the sciences are definitely the poor cousin to the arts," he says.

"But still, it's exciting to get any sort of recognition from the academy. And it is a great honour."

Other Canadian winners this year included a group of Montrealers who made "bullet-time" possible in "The Matrix," two Toronto-based digital sculptors who came up with a refined technique to create the giant ape in "King Kong," and a Dundas, Ont., visual-effects expert who devised an efficient way to merge images in "The Day the Earth Stood Still."

Portions of the sci-tech bash will be shown as part of the glitzy Oscar broadcast March 2.