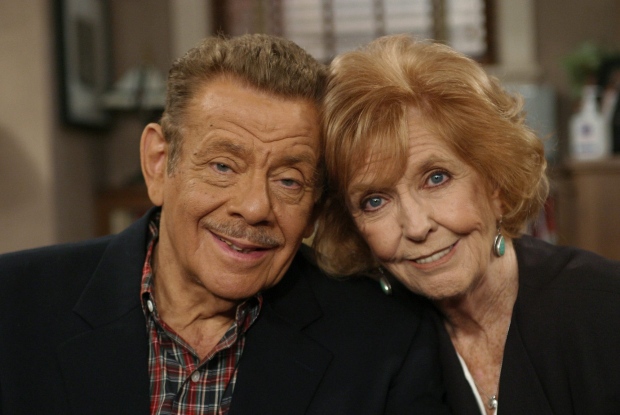 Jerry Stiller, left, and his wife Anne Meara pose on the set of "The King of Queens," at Sony Studio in Culver City, Calif., Nov. 6, 2003. (AP /Stefano Paltera)

LOS ANGELES -- Anne Meara, the loopy, lovable comedian who launched a standup career with husband Jerry Stiller in the 1950s and found success as an actress in films, on TV and the stage, has died.

The Stiller family released a statement to The Associated Press on Sunday describing Jerry Stiller as Meara's "husband and partner in life."

"The two were married for 61 years and worked together almost as long," the statement said.

Born in Brooklyn on Sept. 20, 1929, she was a red-haired, Irish-Catholic girl who struck a vivid contrast to Stiller, a Jewish guy from Manhattan's Lower East Side who was two years older and four inches shorter.

As Stiller and Meara, they appeared in comedy routines that joked about married life and their respective ethnic backgrounds. They logged 36 appearances on "The Ed Sullivan Show" and were a successful team in Las Vegas, major nightclubs, on records and in commercials (scoring big for Blue Nun wine with their sketches on radio).

They were beloved New Yorkers, well known to their Upper West Side neighbours. The marriage lasted, but the act was dissolved in the 1970s as Meara resumed the acting career she had originally sought. She appeared in such films as "The Out-of-Towners," "Fame," "Awakenings" and, directed by her son, "Reality Bites."

Meara was twice nominated for an Emmy Award for her supporting role on "Archie Bunker's Place," along with two other Emmy nods, most recently in 1997 for her guest-starring role on "Homicide." She won a Writers Guild Award for co-writing the 1983 TV movie "The Other Woman."

She also appeared in dozens of films and TV shows, including a longtime role on "All My Children" and appearances on "Rhoda," "Alf" and "The King of Queens." She shared the screen with her son in 2006's "Night at the Museum."

Meara also had a recurring role on CBS' "Murphy Brown" and on HBO's "Sex and the City." In 1975, she starred in CBS' "Kate McShane," which, though short-lived, had the distinction of being the first network drama to feature a woman lawyer.

Meara was an aspiring 23-year-old actress in 1953 when she responded to a "cattle call" by a New York agent casting for summer stock. After the agent chased her around his office, she burst into the waiting room, crying and out of breath, where she found Stiller, a fellow out-of-work actor then 25.

"I took her out for coffee," Stiller recalled decades later for The Associated Press. "She seemed to sense I had no money, so she just ordered coffee. Then she took all the silverware. I picked up her check for 10 cents and thought, 'This is a girl I'd like to hang out with."'

Within a few months, they were wed.

But this was a mixed marriage -- referring to their respective families, Meara said, "Nobody was thrilled when we got married, absolutely nobody." But they accepted it, she added with perfect comic timing: "Nobody sat shiva."

Despite her theatre background, Meara, with her bright eyes and cheeky smile, was a quick study as a comedian when she and Stiller performed in improv groups. Her ability to adapt was all the more remarkable since, back then, "I was down on comedians. Growing up, I loved drama and fantasies. I hated the Marx Brothers. I took all that confusion seriously."

The couple had an old-fashioned appeal not unlike that of Burns and Allen, but Stiller and Meara were thick into the 1950s Beat Generation, an edgy, innovative arts scene based in New York's Greenwich Village, where they had an apartment. "But WE thought that when the Village was REALLY happening was in the '20s, the F. Scott Fitzgerald days, before our time," she said. "People never know what's going on while it's happening. You think, during the Renaissance, people called it 'The Renaissance'?"

The husband-and-wife act was born of desperation shortly after the birth of their first child, Amy, in 1961. There still was insufficient work in legitimate theatre, and improv wasn't paying the bills.

As Stiller and Meara, they drew on their own lives and the world they saw around them for laughs. They created routines and began touring, as well as landing gigs in New York clubs and coffee houses.

Then, in 1963, Stiller and Meara struck gold. They snagged a booking on "The Ed Sullivan Show," CBS' top-rated Sunday night variety show.

"He scared the stuff out of me," Meara recalled in a 2010 interview. "I wasn't the only one. There were international favourites from all over the world throwing up in the wings -- singers and tenors and guys who spin plates. It was live. We were scared!"

But that initial "Sullivan" appearance made them stars, and during the next decade they made 35 more. In one routine, which Stiller considered "a breakthrough," they played two single people (a Jewish lad and Catholic gal) matched by a computer -- and discovering what, in those days, were the sort of problematic differences they had surmounted in real life:

Jerry: "You have a lot of sisters?"

Anne: "I got plenty of sisters: Sister Mary Monica, Sister Bernadette Marie, Sister Mary Virginia. Do you have any brothers?"

Then quickly the pair realize they have plenty in common: They live on the same New York City block, and both love to dance. They decide to go dancing.

Anne (approvingly): "This computer, it really ..."

In 2010, the pair reunited on-screen for "Stiller & Meara: A Show About Everything," a chatty Web series produced by their son and shot in their longtime home on Manhattan's Upper West Side. Their off-the-cuff banter was informed by their lifetime partnership:

Mearer: "You know there's a new movie coming out about the guy who invented Facebook?"

Stiller: "Somebody INVENTED Facebook? What kind of a person would that be?"

Mearer: "A person who is very bright, and figured a lot of people want to share the mundane, miserable moments of their lives with other people: 'I'm your friend, and I just came back from going to the john. I thought you'd want to know."'

Not for the first time, Stiller flinched at her words, while any viewer had to laugh.

Besides her husband and son, Meara is survived by her daughter, Amy, and several grandchildren.

The family statement said: "Anne's memory lives on in the hearts of daughter Amy, son Ben, her grandchildren, her extended family and friends, and the millions she entertained as an actress, writer and comedienne." 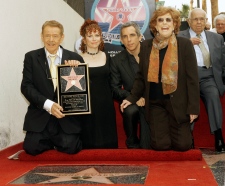 Actors Jerry Stiller, far left, and Anne Meara, second from right, pose with their children, Ben Stiller and Amy Stiller Friday, Feb. 9, 2007, as they are honored with a star of the Hollywood Walk of Fame in Los Angeles. (AP /Damian Dovarganes)