Amber Heard tells court she feared Depp would kill her 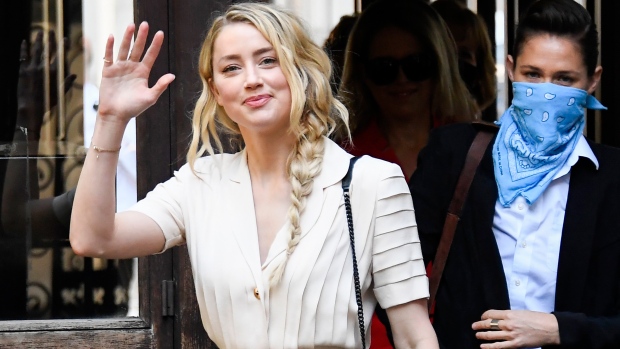 LONDON - Amber Heard has accused ex-husband Johnny Depp of abusing her both physically and verbally while he was allegedly bingeing on alcohol and drugs, claiming that at various times during their tempestuous relationship she feared for her life.

On the first day of her testimony Monday at Britain's High Court in London, Heard also denied accusations she was a heavy drug user and drinker as well as a controlling and abusive person. The court is examining Depp's libel suit against The Sun newspaper over an April 2018 article that labelled him a “wife beater” for allegedly abusing Heard.

Chronicling a series of incidents over their deteriorating relationship, that purportedly included Depp throwing a magnum of champagne and a phone at her and even a “hostage situation” in Australia in March 2015, the 34-year-old actress insisted any action she took in response was purely in self-defence.

She also denied having a problem with her temper following questioning by Depp's lawyer, Eleanor Laws.

“Johnny often put me in a situation where I was confronted with unimaginable frustrations and difficulties, often that were life-threatening to me.” she told the court.

“When I felt my life was threatened, I tried to defend myself and that started to happen years into the relationship, years into the violence,” she added.

The court heard a recording of an argument between the pair, who were married from 2015 to 2017, in which Depp accuses Heard of throwing pots and other items at him the night before. Heard said she had hit - but not punched - Depp and that she only threw things “to escape him.”

Heard said the argument, like so many others, had stemmed from Depp passing out once again in the bathroom after another binge.

“I was worried about Johnny's life and this is the context of this argument, one of many that ended in a physical altercation of sorts,” she said.

Depp, 57, is suing The Sun's publisher, News Group Newspapers, and the paper's executive editor, Dan Wootton, over the article. The Hollywood star, who strongly denies abusing Heard, was at the court to hear his ex-wife's evidence.

In written testimony released as she took to the witness box, Heard said that at various times during their relationship she endured “punching, slapping, kicking, head-butting and choking.” She said “some incidents were so severe that I was afraid he was going to kill me, either intentionally or just by losing control and going too far.”

According to Heard, Depp “explicitly threatened to kill me many times, especially later in our relationship.” She said he blamed his actions on “a self-created third party” that he referred to as “the monster.”

Heard told the court that she loved Depp when he was himself but that she was “terrified of the monster.”

The actor also dismissed evidence from witnesses such as Depp's security guard, Sean Bett, that she was the one who would start an argument.

“These things happened behind closed doors,” she said.

Heard also disagreed “wholeheartedly” over a line of questioning from Laws at the end of the session that she had used make-up to fake injuries, notably at the couple's penthouse in Los Angeles on May 21, 2016 when police were called to an incident.

Heard said Depp has “a unique ability to use his charisma to convey a certain impression of reality” and that he is “very good at manipulating people.”

Heard has been present throughout the trial, watching the proceedings as her ex-husband gave evidence over five days.

Heard is facing questioning over 14 allegations she made of suffering domestic violence by Depp in various locations between 2013 and 2016 - which The Sun's publisher News Group Newspapers is relying on in its defence of the April 2018 article.

Depp and Heard met in 2009 on the set of the film “The Rum Diary,” which was released two years later. They married in Los Angeles in February 2015. Heard filed for divorce the following year, and the divorce was finalized in 2017.

Depp claims Heard was the aggressor during their volatile relationship, which he has likened to “a crime scene waiting to happen.”

In nine days of testimony at the High Court, judge Andrew Nicol has heard from Depp and from several current or former employees who have backed his version of events.

Heard claimed in her written testimony that Depp “often didn't remember what he had done” because of the amount of alcohol and drugs he had consumed, and that “it was as if it hadn't happened for him.”

Heard is due to back in court Tuesday and her testimony is now expected to last for four days instead of three.