Drake, Wayne Gretzky among the celebrities taking in Game 5 of the NBA Finals 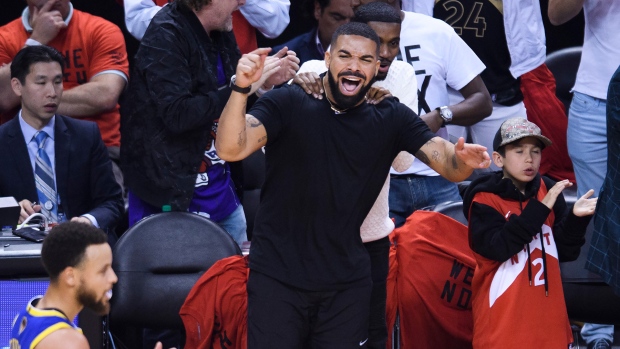 TORONTO - The Toronto Raptors left O Canada duties to their fans ahead of Game 5 of the NBA Finals.

Drake - and the rest of the boisterous, red-clad crowd inside a rabid Scotiabank Arena - didn't disappoint.

The rapper/Raptors' global ambassador sang and swayed to the national anthem before raising his hands skyward and pumping his fists at its conclusion Monday as Toronto looked to close out the best-of-seven title series against the Golden State Warriors.

Drake was on his feet most of the first half, demonstrably cheering every Raptors' make and Warriors' miss. He had words for Golden State forward Draymond Green after he picked up a technical foul midway through the second quarter.

Baka Not Nice, who's signed to Drake's OVO Sound music label, performed during a second-quarter timeout. Fellow Canadian rapper Tory Lanez followed up with a halftime set of his own.

Drake was at his seat near Toronto's bench long before Monday's tip-off, sporting a sky blue jacket with a black 'X' on the front before revealing a nondescript black t-shirt underneath.

The Canadian musician shook hands and shared a brief word with Green - the pair jawed at each other earlier in the series - and hugged ABC sideline reporter Doris Burke.

He also appeared to offer some friendly advice to the Warriors as they took the floor before the anthems.

Drake trolled injured Warriors star Kevin Durant in Game 2, which Golden State won 109-104 before Toronto took the next two in Oakland, Calif., to grab a commanding 3-1 lead in the series. Drake's black hoodie that night included a picture of actor Macaulay Culkin, who played Kevin McCallister in the “Home Alone” movie franchise, mouth open and holding his face above the word “Kevin?!?!?!”

But Drake was noticeably understated in his attire Monday as Durant made his series debut in Game 5 after missing the last month with a calf ailment.

Durant appeared to re-injure his calf early in the second quarter. The crowd initially cheered as he sat on the floor holding his leg, but Raptors centre Serge Ibaka as well as guards Kyle Lowry and Danny Green waved at the crowd to stop.

Hockey great Wayne Gretzky watches play during first half basketball action in Game 5 of the NBA Finals in Toronto on Monday, June 10, 2019. THE CANADIAN PRESS/Frank Gunn