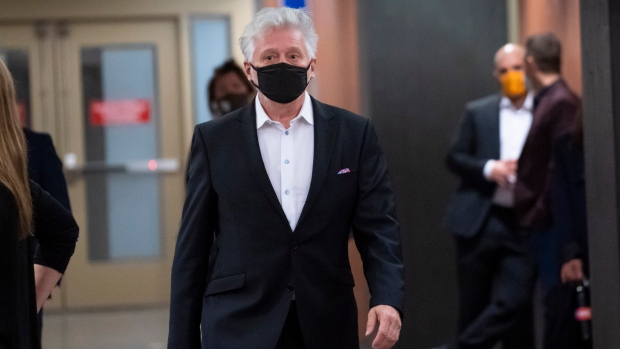 Just for Laughs founder Gilbert Rozon walks the hall of the courthouse as he arrives for the beginning of his sexual assault trial in Montreal on Tuesday, October 13, 2020. THE CANADIAN PRESS/Paul Chiasson

MONTREAL - Gilbert Rozon, the founder of the Just for Laughs comedy festival, took the stand at his rape trial Wednesday and testified that it was his accuser who got into bed with him.

He told the court he remembers thinking, “She's really weird.”

Rozon, 65, is charged with rape and indecent assault for acts allegedly committed in 1980 in St-Sauveur, Que. The charge of rape is based on the wording in the Criminal Code at the time of the alleged offence.

The woman, whose identity is protected under a publication ban, testified on Tuesday that she and Rozon had gone out to a club together, and he drove her to a house in the ski resort town north of Montreal.

She said he aggressively tried to have sex with her that night and only relented after she fought him off. But the morning after, she said, she woke up to find him on top of her and that he raped her.

Rozon testified that at the time of the alleged incident, he didn't have much sexual experience. He said the woman's behaviour that morning in 1980 had surprised him because she had rejected his advances the night before.

He said around 7 a.m. that day, he woke up and the young woman was straddling him on the bed, wearing a dress but no top or bra.

“It was bizarre,” he told the court. He said he told several friends about the alleged incident because of the degree to which the encounter had affected him.

Earlier in the day, defence attorney Isabel Schurman cross-examined the complainant and told her that in her statement to police, she did not mention asking Rozon to stop.

The woman replied that just because it wasn't in her statement to police doesn't mean she didn't ask him to stop.

She testified on Tuesday that she went to police in 2017 following the publication of a series of allegations against Rozon.

This report by The Canadian Press was first published Oct 14, 2020.