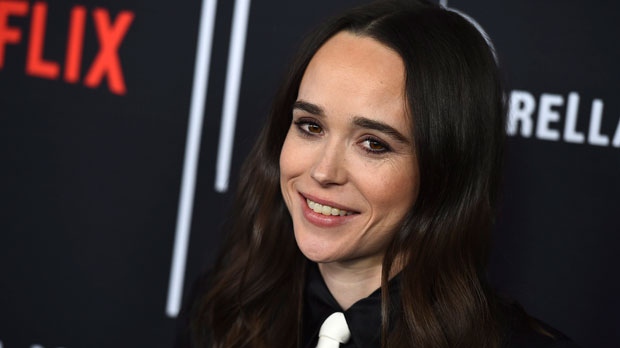 Cast member Ellen Page arrives at the Los Angeles premiere of "The Umbrella Company" at The ArcLight Hollywood on Tuesday, Feb. 12, 2019. THE CANADIAN PRESS/AP, Jordan Strauss/Invision

TORONTO -- An impending apocalypse looms over Netflix's new comic book series "The Umbrella Academy" -- but for Canadian star Ellen Page, the prospect of the end of the world doesn't seem like science fiction.

And much like the show's dysfunctional superhero family, Page fears society will succumb to squabbling and apathy in confronting environmental catastrophe -- particularly in her home province of Nova Scotia.

In an interview with two of her co-stars, the Halifax-born Oscar nominee said she feels a responsibility to amplify the voices of marginalized communities who are disproportionately affected by environmental hazards.

"There are so many issues happening, and not enough people know about it. And that's because, of course, marginalized people are continuously silenced," Page said.

"It's a beautiful province and a beautiful country, and I don't think people know the realities of what's happening -- particularly how the most marginalized are brutally affected."

Echoing her numerous tweets on the issue, Page pointed to instances of what she sees as environmental racism, such as the landfills that surround predominantly black communities in rural Nova Scotia.

She has also been a vocal critic of the Northern Pulp mill's plan to close its effluent treatment facility in Boat Harbour, a heavily polluted lagoon on the edge of the Pictou Landing First Nation.

The company wants to build a new treatment facility and a pipeline to carry treated wastewater, or effluent, to be discharged in the Northumberland Strait. The project, which was formally registered with Nova Scotia's Environment Department earlier this month, has raised the ire of fishermen, environmentalists, Indigenous activists and others.

Page, who has starred in "Inception," "Juno," "X-Men" and numerous other films, said there's been a lot of "complacency" from the provincial Liberal government.

"We need to do something, because this makes people sick," she said.

Asked about Page's criticism, Nova Scotia Premier Stephen McNeil said his government will conduct its environmental assessment of the Northern Pulp project based on its scientific merits -- not the commentary of people "from far away."

But Page said she sees her role not as an outside agitator, but a listener who can use her platform to spotlight important work that's happening on the ground.

"I'm trying to figure out ways to strategize, because it's local activists who have been fighting who should be leading the way," she said. "I just want to learn and do what I can to support and make changes in Nova Scotia."

Page brought global attention to these issues during a recent appearance on "The Late Show with Stephen Colbert," which has been viewed online nearly 1.4 million times. She also took aim at U.S. Vice President Mike Pence on the talk show for his stance on LGBTQ policies, saying the politician would prefer she and her wife not be married.

Speaking to The Canadian Press on Thursday, Page said Canada has made strides in backing LGBTQ rights, but more work needs to be done to protect the most vulnerable members of the community.

"I didn't grow up in a queer-positive environment, but I'm grateful to see it's changing," said Page. "A lot of the time, we see the progress and don't understand that certain members of the community are dealing with a lot of day-to-day struggles."

In "The Umbrella Academy," Page's character struggles with feeling different as the lone ordinary member of an extraordinary family.

Based on the graphic novel series created by former "My Chemical Romance" lead singer Gerard Way, the story begins with 43 women around the world who give birth at the same time in 1989 despite not being pregnant moments earlier.

An eccentric billionaire scoops up seven of the babies, who are then raised to form a team of child superheroes -- except for Page's Vanya, who is taunted for her lack of special powers.

When their adoptive father dies, the estranged siblings are reunited and forced to work together to stave off imminent global annihilation -- if they can set aside their familial infighting.

For Page, the show can be read as a cautionary tale about the consequences of international inaction on climate change.

"You have characters who are a little bit like, 'eh,"' she said with a shrug. "Sort of like how we're handling the world ending in 2030."

"The Umbrella Academy" begins streaming on Netflix on Friday.