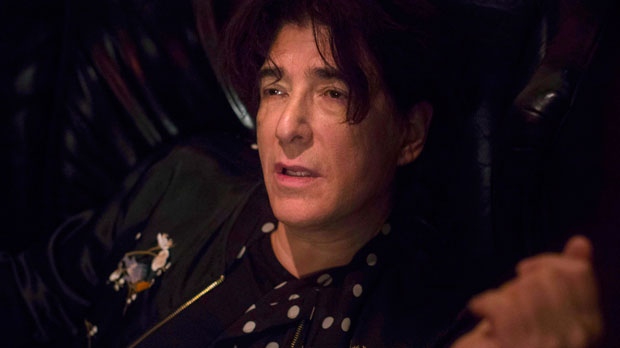 Jason Sniderman, posing as Ensign Broderick, is photographed in Toronto on Wednesday, October 10, 2018. Jason Sniderman has been waiting nearly 60 years to bring glam-rock star Ensign Broderick to life. After facing backlash in high school over his androgynous styles, the musician says he chose to keep his alter-ego confined to his bedroom, where he wrote songs that never saw the light of day. Now, more than four decades later, the son of Sam the Record Man founder Sam Sniderman is bringing Ensign back to life in a huge way, releasing five albums this year with another one lined up for early next year. THE CANADIAN PRESS/Chris Young

TORONTO -- Jason Sniderman has been frustratingly patient with his glam-rock persona, Ensign Broderick.

It was nearly half a century ago when he was a teenager that he first imagined his alter ego taking the music industry by storm. Ensign was a cocktail of influences dreamed up in his bedroom -- a dash of David Bowie's Ziggy Stardust mixed with Nick Cave's bold audacity, and a splash of Mick Jagger's flamboyant swagger.

He was ready to make Ensign Broderick one of Canada's glam rock gods -- until he changed his mind and stowed the idea away for decades. Now 60, he's bringing the persona into the spotlight with nearly a career's worth of albums ready for release.

"Time is so elastic in what I'm doing," says the soft-spoken musician as he sips white wine at a Toronto restaurant.

Over the past year, he's released five studio albums of original material, culled from tapes he recorded as a teenager and remixed in the present day. They debuted on streaming services and appeared on vinyl with little fanfare -- a quiet rollout intended to spread Ensign's reputation through organic word of mouth rather than social media.

If it works, vinyl collectors will be telling their friends about the rich catalogue of an undiscovered rock legend who sounds like Bowie and Bryan Ferry's mysterious love child.

"BloodCrush" became the latest to join his back catalogue earlier this month. Another album will be added early next year with support from Canadian indie label Six Shooter Records.

Each release carries Ensign along the chronological path in his story, starting in the 1970s and gradually moving into the new-wave era of the early 1980s. In the alternate universe of his persona, Sniderman supposes with five albums of full-length material under his belt, his fictional age would be somewhere in his late 20s. That gives him plenty of roadway to forge the remainder of Ensign's later career.

"For me I see the whole thing as a totality," he says.

Sniderman knows the record business like few others. His father was Sam Sniderman, the late founder of now defunct music store chain Sam the Record Man.

Growing up, Sniderman practically lived inside the walls of the Toronto flagship where he began stocking shelves at age five. His dad would pay him in vinyl records instead of cash, so before his tenth birthday he had amassed an impressive collection of discs, from the Rolling Stones to Little Richard.

He devoured rock magazines of the era including Cream and Circus, giving him the notion that talent plus a colourful personality was the best way to attract girls. Even the most androgynous performers were considered sex symbols when they had a guitar in their hands.

And so Ensign Broderick sprang to life inspired by English rock stars of the early 1970s. "Ensign" was pulled from "Jensen," the maker of his favourite car, and "Broderick" simply sounded cool, he says.

"You spend a lot of time in your bedroom thinking about being someone other than who you are," he says. "Eventually something comes out of that."

He began slipping into glittery jackets made with craft supplies and tried on makeup in the privacy of his bedroom. It wasn't until he walked into his high school that he learned his classmates weren't so enthused about his glamorous side.

The conflict came to a head at the school's variety show where his band "doubled down on being the New York Dolls mixed with Elton John."

Their performance was a colossal failure, he says.

Two girls who organized the event accused him of ruining the show, and a teacher cornered Sniderman and told him the performance was too loud, too long and too gay, Sniderman remembers.

When the school issued an apology over the P.A. system, Sniderman says it cut deep.

"I was vilified," he says. "I was devastated. To me, it was a pushback on everything I thought I was."

So he retreated to his bedroom where he continued to write in secrecy. Songs turned into concept albums, and he designed album covers using cut-and-paste art inspired by Bowie and Roxy Music, imaging the fan frenzy his big debut would ignite.

But his friends weren't buying into the persona and the lukewarm reception eventually became too much of a burden. He shelved the project and turned to playing safer gigs as a session musician. He eventually joined synthpop outfit Blue Peter, whose 1983 hit "Don't Walk Past" helped them get opening slots on Toronto dates for the Police and Simple Minds.

He also stepped in as vice president of Sam the Record Man in the 1980s, while continuing to play music on the side, and took the reins at the company alongside his brother when Sam's emerged from bankruptcy in the early aughts.

Throughout, Sniderman says Ensign was only in "a bit of a hibernation stage." About five years ago he began pulling out the old recordings and wondering if he could take them somewhere new in the digital era.

First he uploaded a few rough versions of songs to SoundCloud, a free streaming platform for musicians. Word got to Six Shooter founder Shauna de Cartier who was instantly fascinated with the treasure trove of music history.

She urged Sniderman to consider letting her label unleash the recordings.

"I was thinking, you're making the biggest mistake of your life," Sniderman recalls.

But de Cartier's persistence won him over.

She cracked open the Ensign Broderick archive, first releasing the album "Feast Of Panthers" in March before digging deeper into other works that fully realized his teenage recordings.

On his album "Ranger," released in May, the song "Four Bells" uses a layered track of harmony and rhythm recorded in 1976 as the basis for a Bowie-esque song drenched in brass instrumentation and finger snaps.

The latest album "BloodCrush" features a number of time warps into the 1970s, including "Electric Blue," a song written by a 13-year-old Sniderman that carries the weight of melancholic young love.

"I'm getting to the point where it is a complete work," he says of his catalogue.

Sniderman says he's not under any illusions that Ensign Broderick will suddenly sweep the music scene. He'll be humbled by whoever finds inspiration in the music, since for so long it seemed like nobody would.

"That would be enough for me."