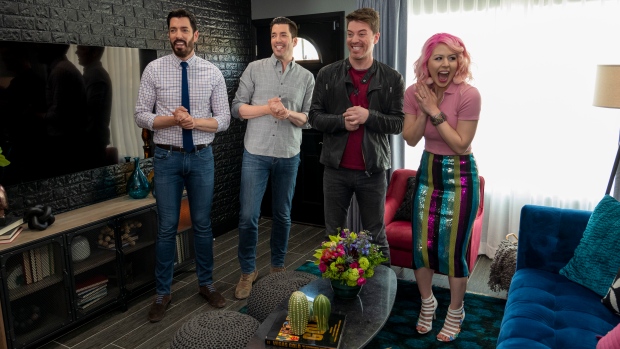 Drew Scott (left to right), Jonathan Scott, JD Scott and Annalee Belle are shown in a handout photo from the episode of Property Brothers: Forever Home. JD Scott, the older brother of renovation twins Drew and Jonathan Scott, says he's recovering from a debilitating illness that mystified doctors for over a year, and had him believing he was on the verge of death. THE CANADIAN PRESS/HO-HGTV-Dennys Ilic

TORONTO - The older brother of renovation twins Drew and Jonathan Scott says he's recovering from a debilitating illness that mystified doctors for over a year, and had him believing he was on the verge of death.

The Vancouver-born JD (James Daniel) Scott details his health struggle in a video posted to Instagram, occasionally tearing up with his equally emotional fiancee Annalee Belle at his side.

The 43-year-old says it all started with strange symptoms that included intense heat sensitivity and fatigue. That had doctors thinking it was lupus, then a brain aneurysm, and then possibly two brain aneurysms.

In the meantime, the Las Vegas-based Scott says he couldn't venture far from home and could only work for about 15 minutes at a time. He often wore a cooling vest that pumped ice water to keep his temperature down.

Eventually, a medical doctor who was also an expert in holistic medicine diagnosed a severe gastrointestinal infection. Scott says he began to feel better within days of starting antibiotics and a restricted diet that cut out wheat, dairy, gluten, soy and sugar.

Scott, who appears on the finale of the HGTV series “Property Brothers: Forever Home” on Monday, says it's been a month since his treatment and that he's starting to feel like himself again.

“The world and life works in mysterious ways. I'm so grateful for this one right here because I wouldn't have made it,” Scott says while gesturing to a teary Belle.

The couple, who got engaged in October, assured fans that Scott appears to have turned a corner after months of “having to live like a bubble boy.”

“I felt at times recently like I did before this all started over a year ago. To me that's huge progress,” says Scott, who has also appeared in the twins' HGTV series, “Brother Vs. Brother.”

Scott says he was actually sick during the filming of Monday's episode of “Property Brothers: Forever Home,” even though it may not be apparent to viewers.

In that finale episode, the twins embark on a full-scale renovation of their big brother's Las Vegas home, with help from their father.