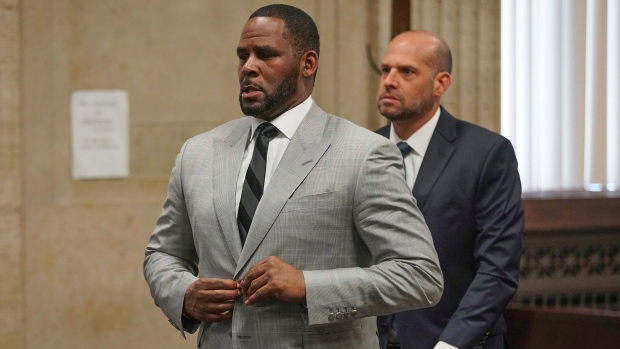 CHICAGO - A federal judge on Tuesday ordered R. Kelly held in jail without bond after a prosecutor warned that the singer accused of having sex with minors and trying to cover up the crimes would pose an extreme danger to young girls if set free.

Leinenweber said that under federal law Kelly would have to prove that he was not a danger to the public and Kelly's attorney, Steve Greenberg, had failed to do so.

Kelly faces an array of sex-related charges in Chicago and New York. Appearing in court wearing an orange jumpsuit and shacked at the ankles, he said only two words, “Yes, sir,” when the judge asked him if he understood the charges.

The ruling Tuesday means that Kelly, who pleaded not guilty to the charges contained in the Chicago indictment , will remain in custody to face a separate indictment in New York. He is charged there with racketeering, kidnapping, forced labour and the sexual exploitation of a child.

It was unclear when that hearing would be and if he would have to be transported to New York for the hearing, or if he could appear via a video linkup from the federal jail in downtown Chicago.

The decision to deny bond raised the possibility that the 52-year-old Kelly could spend the rest of his life behind bars. Renato Mariotti, a former federal prosecutor in Chicago, said that “each of the federal indictments could take one to two years to go to trial.” Depending on delays in the case, Mariotti said Kelly's stay in jail just awaiting trial could go on a lot longer than that.

Krull said Kelly was acquitted of child pornography charges in 2008 only because he paid off the victim and her family.

“Electronic monitoring can't stop obstruction of justice, witness tampering...” she said. “He can entice victims to his own home.”

Greenberg said preparing for trial will be an long process made even more difficult because Kelly does not know how to read and therefore someone must visit him in jail to read him the reams of documents the case will generate.

He said Kelly is no longer rich and has filed for bankruptcy.

“How could he flee?” Greenberg asked. “He has no money.”