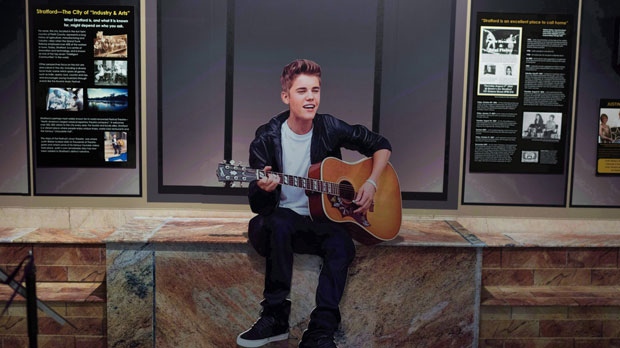 A cut-out of Justin Bieber sits at the Stratford Perth Museum for the Steps to Stardom exhibition about Justin Bieber in Stratford Ont. on Saturday, Feb.17, 2018. THE CANADIAN PRESS/Hannah Yoon

Justin Bieber joined his partner Hailey Baldwin on Sunday as they swung by an exhibit dedicated to his career in Stratford, Ont., and sparked new questions about their marriage status.

Organizers at the Stratford Perth Museum wrote on Instagram that Bieber "very graciously introduced Hailey as his wife" during the visit.

"Perhaps just a term of endearment?" the museum added in the comments section of the post.

It's the latest morsel Bieber and Baldwin have offered in the ongoing speculation over whether the couple has tied the knot. People Magazine reported in September that they married in a New York courthouse, though Baldwin later denied those claims on Twitter.

The couple was engaged in the Bahamas in July.

John Kastner, general manager of the Stratford Perth Museum, says the pop singer and the model spent about 45 minutes mingling with fans at the exhibit, which showcases memorabilia from 24-year-old singer's tours and early years in Stratford.

Baldwin signed "I (heart) you forever" on a blackboard reserved for fan messages.

It's not the first time Bieber has visited the museum.

Since the Steps to Stardom exhibit opened Feb. 18, Kastner says he's stopped by numerous times, both alone and with his grandparents.