Key Harvey Weinstein accuser, driven to tears, is due back on stand 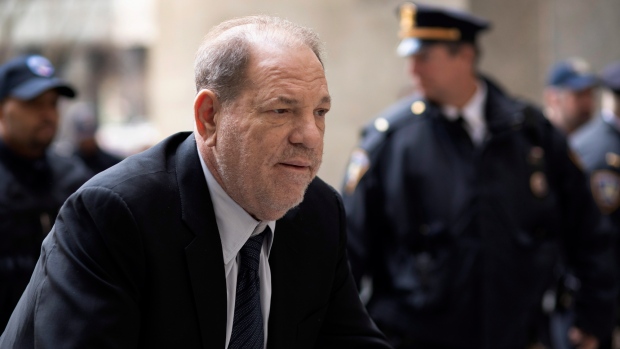 Harvey Weinstein arrives at court for his trial on charges of rape and sexual assault, Monday, Feb. 3, 2020 in New York. (AP Photo/Mark Lennihan)

NEW YORK - A key accuser in the New York City rape trial of Harvey Weinstein is due back on the witness stand for a third day of testimony after she broke down in tears Monday.

It stopped an exhaustive cross-examination that focused on the nature of her relationship with the once-powerful movie mogul.

Weinstein's lawyers are conducting a painstaking review of emails and other evidence they say paint the 34-year-old as a manipulative liar who gritted her way through sexual encounters with Weinstein because she enjoyed the perks of knowing him.

She became emotional while reading an email passage about being abused earlier in her life.

It was part of a lengthy confessional email she sent to her then-boyfriend in May 2014 about her relationship with Weinstein.

She was bawling as she left the courtroom, at first for a brief break, and her cries could be heard from a nearby witness room.

When it was clear she could not continue, the judge adjourned for the day.

The woman, who met Weinstein while she was an aspiring actress, testified Monday that she tried to make Weinstein "my pseudo father" after a rough upbringing.

She said she continued seeing him and sending him flattering emails after the alleged rape in March 2013 because she didn't want him to harm her fledgling career.