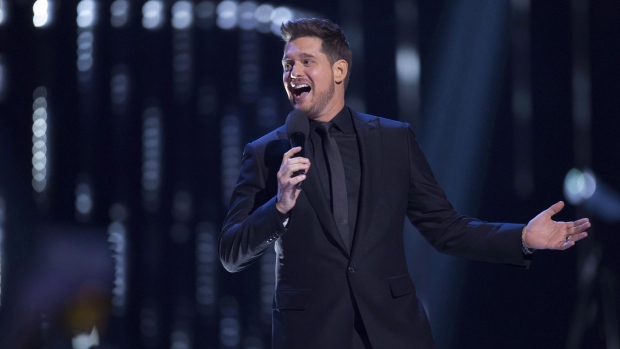 Host Michael Buble is shown on stage at the Juno Awards in Vancouver on March, 25, 2018. Canadian crooner Michael Buble is set to revisit the hits of his musical career in a multi-network special on Wednesday. The one-hour show will air at 10 p.m. on Rogers-owned Citytv as well as Bell's CTV and online streaming service Crave. THE CANADIAN PRESS/Darryl Dyck

TORONTO - Michael Buble's suave likeness is headed for the halls of wax infamy alongside British royalty.

The Canadian pop crooner took to social media to announce he's being replicated at Madame Tussauds wax museum in London.

He'll be in good company at the tourist hotspot, which already houses wax versions of Ed Sheeran, Jamaican sprinter Usain Bolt and members of the Royal Family.

Buble's duplicate makes its debut in December - timing that couldn't be any better for the singer who's become synonymous with the holiday season.

But what he'll look like remains a mystery. A representative for the museum says they're keeping the figure under wraps for now.

In the video announcement, Buble revealed the news while his one-year-old daughter could be heard crying in the background.

“You can probably hear my kid screaming,” he said with a laugh.

“This is one of those points where I wish there could be two of me, and luckily there is.”

Buble joins a number of other Canadian musicians who've been recreated at Tussauds this year.

Madame Tussauds Las Vegas introduced a wax version of Drake posing in a recreation of his “Hotline Bling” music video.

Shawn Mendes was added to the Berlin location lying barefoot on the ground so visitors could snuggle beside him for a photograph.