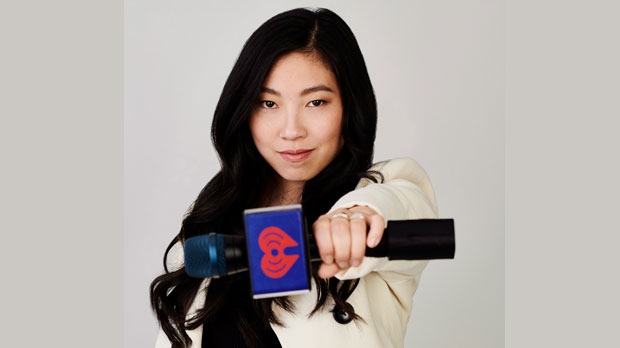 TORONTO -- Crack open an energy drink and prepare for surprises -- that's how actress Awkwafina plans to kick off hosting duties at the iHeartRadio MMVAs on Sunday.

The breakout star of "Crazy Rich Asians" and "Ocean's 8" will mark her whirlwind summer box-office success by taking the reins at the live broadcast, which fuses an awards ceremony with a boisterous celebrity-packed Toronto street party.

"I will definitely bring a tinge of awkwardness and a tinge of wild energy," the host promised ahead of the event, which airs on Much, CTV and streams online.

"I'll get hopped up on Red Bull and it'll be really good."

The MMVAs -- once called the Much Music Video Awards -- are uncharted territory for the entertainer, who began as a YouTube rapper before appearing in major Hollywood movies. But she's heard many stories about the show's notorious screaming teenage audience that gathers each year to spot their favourite stars.

She thinks they'll offer her plenty of motivation to make the night memorable.

"When you're that close to the crowd, that's when you feel the most," she said. "It's like electricity."

The New York native, born Nora Lum, is still learning the ropes of stardom herself. She's spent the last few months attending film premieres, mingling with her "Ocean's 8" co-stars Sandra Bullock and Rihanna, and become fodder for countless think pieces focused on how "Crazy Rich Asians" is a cultural moment, particularly for Asian-Americans.

Trying to absorb these accomplishments while keeping pace with her hectic schedule of public appearances can be emotional, she admitted.

"I get the feels," she said. "You've got to take a minute to just enjoy. If you don't, the moment passes."

Winning an MMVA can be a career mark for young musicians, in part because six of the categories are voted on by fans.

Leading the nominees this year is pop heartthrob Shawn Mendes who edged out Drake by a single nod. Mendes has eight nominations while Drake is coming into the show with seven, making it a race to see who wins the most between them.

Both performers will face off in some categories, including video of the year where Mendes is up for "In My Blood" and Drake for "God's Plan."

Other heavy-hitters include Alessia Cara with five nominations, while British singer Ed Sheeran and electronic dance producer Marshmello have four nods each.

A new MMVA award will be handed out for song of the summer, which could be especially controversial this year considering at least one of the season's biggest hits isn't even in the running.

Drake's "In My Feelings," which climbed the charts in July before it sparked a dance sensation on social media, has been one of the summer's most talked about songs. But it's his single "Nice for What" that's nominated, even though it peaked on the Billboard charts in June, and held the No. 1 spot for fewer weeks.

Other song of the summer nominees are Bebe Rexha and Florida Georgia Line's "Meant to Be," Cardi B's "I Like It," and "Body," a song produced by London, Ont.-raised production duo Loud Luxury. The list is rounded out by Marshmello and Anne-Marie's "Friends," as well as Zedd and Maren Morris' "The Middle."

Performers for the MMVAs include Halsey, Meghan Trainor, 5 Seconds of Summer and Chinese singer Kris Wu.

Awkwafina said she's exited to see all the performers, but she really hopes for a chance encounter with Prime Minister Justin Trudeau, who isn't expected at the event.

"He's a heartthrob inside and outside, you know?" she said.

"But I know he's a busy dude, being a heartthrob and making public policy changes and things like that, so I won't take up his time."