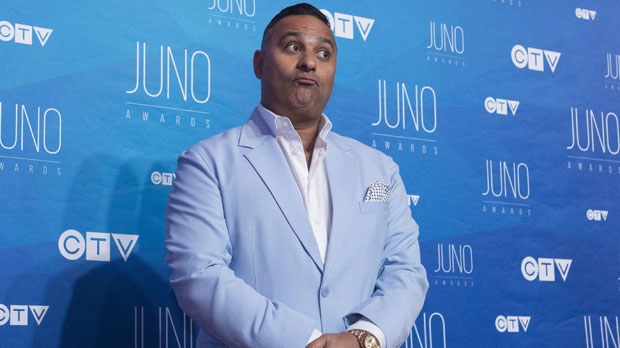 Host Russell Peters poses on the red carpet ahead of the Juno awards show in Ottawa on April 2, 2017. THE CANADIAN PRESS/Justin Tang

TORONTO -- "The Indian Detective" star Russell Peters became a real-life crime fighter this week when he helped take down a man allegedly attempting to steal from a jewelry shop in New York City.

Security footage posted on the tabloid news website TMZ shows the Canadian comedian helping apprehend a man who was allegedly attempting to flee the NYC Diamond District store with an item.

TMZ cites law enforcement sources as saying a 27-year-old was trying to steal a ring valued at US$150,000 on Tuesday.

A man has been charged with robbery and criminal possession of stolen property, according to the report.

Peters' brother and manager confirmed the report to The Canadian Press, noting the Brampton, Ont.-raised funnyman is in New York for a series of sold-out shows on Long Island and in New Jersey.

Clayton Peters said the jewelry store is owned by a friend of the standup star, who played a Toronto police officer in the TV series "The Indian Detective," which aired on CTV and Netflix.

He said Peters was there visiting his friend and ended up using his blue-belt skills in Brazilian jiu-jitsu to help subdue the potential thief.

He added that the Emmy-and Peabody Award-winning comic also gave a statement to police.

Peters is known for skewering racial stereotypes in his standup act, which has sold out stadiums around the world and been shot for various TV specials.

His current tour will take him through several cities in the U.S. until early May.

Last year he co-hosted the Netflix series "A Little Help With Carol Burnett."

Peters' other acting credits include the films "Source Code," "Breakaway," "Chef" and "Supercon."

He and Jennifer Andrade, a former Miss Universe Honduras, are expecting a child together.

The 48-year-old Peters also has an eight-year-old daughter with his ex-wife, Monica Diaz.