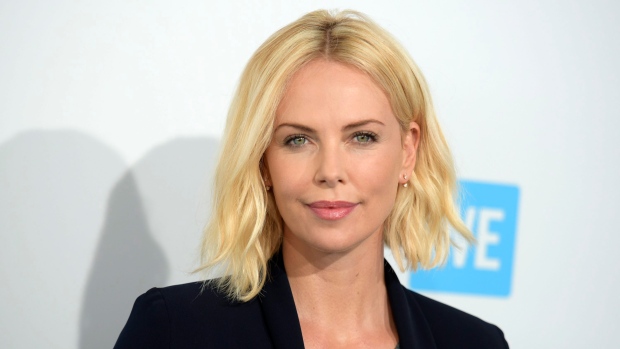 Charlize Theron arrives at WE Day California at the Forum in Inglewood, Calif. on Thursday, April 7, 2016. (Photo by Richard Shotwell/Invision/AP)

The moment was captured on popular YouTube series "Hot Ones," where celebrities drag their taste buds through a gruelling challenge of spicy heat on meat.

Theron's video has racked up 3.4 million views since it debuted five weeks ago, making it the most popular clip of the season. The effect led right back to Dawson's sauce.

Overall sales are up 10 times from this time last year, Dawson added, declining to give specific figures for competitive reasons.

"Hot Ones" features their sauce in every episode of the current season, which also includes Canadian singer Shawn Mendes wincing his way through hot wings, and actress Taraji P. Henson tapping out before her challenge is finished.

She asks her security guard to see it through to the end, accepting her spot in the "Hall of Shame."

Theron doesn't surrender to the heat, instead charging through rising levels of hotness, of which Dawson's ranks No. 4 on the scale.

"It's a very pretty bottle with soft writing," she says on first glimpse.

"It's somewhat romantic and I think that's just to (expletive) with me," she adds. "'Cause it's going to be really not romantic and soft."

While Theron chews on the wing she offers her verdict: "That has got a lot of flavour."

Dawson was chuffed when he heard the feedback.

"She's got that tough attitude, which I really admire," he said, noting that hot sauce fans likely took her endorsement seriously.

"People look for this stuff if they really want it... and when they see something like the show, it gives them... (reason) to pick this stuff up, it's wild."

Dawson's began making hot sauces about five years ago and operates with only three employees, though "Hot Ones" is expanding their profile.

The remaining lineup of celebrity guests this season remains a secret, but Dawson has one Canadian actor he'd like to try his sauce -- Vancouver-born actor Ryan Reynolds who plays the lead in superhero flick "Deadpool."

"I would love if Ryan Reynolds did the 'Hot Ones' show in full costume," he said.

"That's just me being hopeful for another Canadian guy, too."