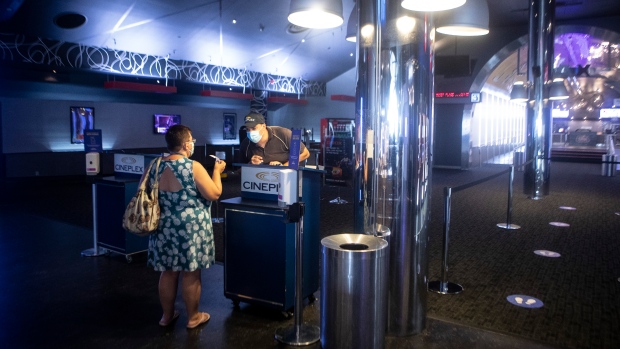 A moviegoer presents a ticket at a Cineplex Movie Theatre in Toronto on Friday, July 16, 2021 as theatres in the province reopen. THE CANADIAN PRESS/Chris Young

While moviegoers flocked to testosterone epics "Top Gun: Maverick" and the latest "Doctor Strange" over the summer, the head of Cineplex Inc. says he's certain the romantic comedy is due for a comeback on the big screen.

“I've had discussions with studios and a lot of them are saying that's going to be a focus,” he said of mid-tier movies as Cineplex reported its first quarterly profit since the start of the pandemic.

Jacob referred to the popularity of Baz Luhrmann's "Elvis" as a sign of what he hopes is coming. The film's budget was around $85 million, relatively conservative by today's Hollywood standards for a big release, and it drew older viewers who've proven reluctant to venture out in recent months.

So did "Top Gun," an unprecedented mega-budget blockbuster with mass appeal, which became Cineplex's most popular title of the second quarter. It helped drive profits to $1.3 million, or two cents per share, for the three months ended June 30.

The results compared with a steep shortfall a year earlier when the company was $103.7 million in the red, a loss of $1.64 per share, as it dealt with patrons who were reluctant to visit their recently reopened cinemas.

Moviegoer attitudes have changed since then, Jacob said, which has proven itself in the results. Revenue was also up to $349.9 million from $64.9 million the prior year.

Bigger movies meant more lucrative ticket sales as people upgraded to Imax and VIP theatre experiences, which boosted box-office revenues to $12.29 per patron compared with $10.89 per patron a year ago.

Jacob said it wasn't just about throwing the biggest movies on all of the screens. The company found that selectively programming more international fare also sold more tickets than in past years.

“We played a Bollywood movie in Sudbury and it worked," he said.

"But that was because we were able to pinpoint the residents in particular markets and be able to cater the product to them."