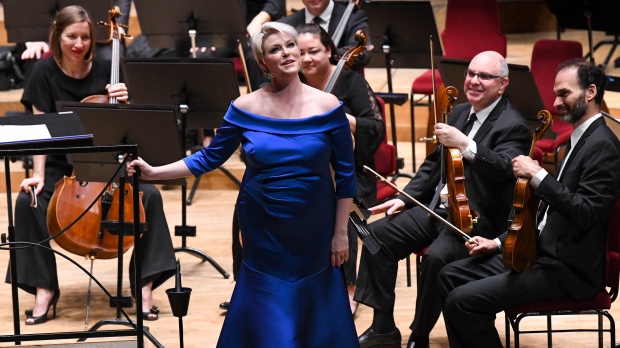 Classical music fans are remembering Canadian soprano Erin Wall as a virtuosic talent whose voice was taken away too soon. Erin Wall is seen during a performance in an undated handout photo. THE CANADIAN PRESS/HO-Fred Cattroll, *MANDATORY CREDIT*

Classical music fans are remembering Canadian soprano Erin Wall as a virtuosic talent whose voice was taken away too soon.

The singer's family says in an obituary that Wall died Thursday of complications from metastatic breast cancer. She was 44.

With a repertoire ranging from Mozart to modern opera, Wall held top roles in some of the most prestigious operas in the world, including the Metropolitan Opera, La Scala, Vienne State Opera, Paris Opera and the Lyric Opera of Chicago.

Her vocal versatility has been featured on several recordings, including a rendition of Mahler's Eighth Symphony with the San Francisco Symphony that won a Grammy Award for Best Classical Album in 2010.

As news of her death sparked an outpouring of tributes on social media, Christopher Deacon, the president and CEO of Canada's National Arts Centre, wrote that Wall “shone brightly on stages around the world, inspiring and moving so many.”

The National Arts Centre Orchestra also wrote that it was “devastated” by the loss of Wall, who it said will be “deeply missed and remembered for her vivacious spirit and infectious laugh.”

Born in Calgary on Nov. 4, 1975, Wall was raised in Vancouver, where her parents, both American musicians, played in the local symphony.

She studied piano at the Vancouver Academy of Music and went on to study singing at Western Washington University in Bellingham, Wash., Rice University in Houston, the Aspen Music Festival and Music Academy of the West in Santa Barbara, Calif.

In 2001, she launched her professional career as a member of the Ryan Opera Center at the Lyric Opera of Chicago. She returned to Canada in 2009, and settled down with her family in Toronto.

She appeared in concerts with the Boston, San Francisco, Philadelphia, Pittsburgh and Nashville symphony orchestras in the United States, as well as the London Symphonic Orchestra and the Paris Orchestra.

In Canada, in addition to the National Arts Centre Orchestra and the Montreal Metropolitan Orchestra, she sang with the Montreal Symphony Orchestra, the Toronto Symphony, the Calgary Philharmonic and the Edmonton Symphony.

She continued performing across the globe as she was treated for breast cancer in 2018, and in her spare time, trained to complete the New York City Marathon.

“Erin was a bright light with an amazing gift and a huge heart,” the family's obituary reads. “Just as her soul and special gift allowed her to lift the spirits of those she touched, may her spirit shine over all who knew her and forever keep her close to our hearts.”

Wall leaves behind her husband and two children. In honour of her passion for mentoring young artists, her family is establishing Erin Wall Tribute Fund at the Canadian Opera Company.