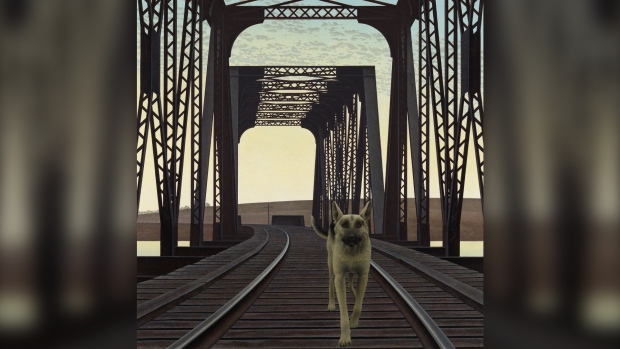 TORONTO - A painting by Alex Colville shattered a price record for a work by the Canadian master at a live online auction held Wednesday.

Colville's 1976 canvas “Dog and Bridge” sold for more than $2.4 million - doubling its estimated value. The work had been owned privately for decades and had never appeared at auction before.

“Presenting a masterpiece as special as Colville's 'Dog and Bridge' was a highlight for Heffel, and we're thrilled that our excitement was matched by our bidders,” said David Heffel, president of Heffel Fine Art Auction House, which held the sale.

Pablo Picasso's 1939 “Tete de femme” sold for more than $1.3 million - about in the middle of its estimated range.

Five works by Lawren Harris were also sold, two for well above their estimates. His “North East Corner of Lake Superior (Lake Superior Sketch XXXVIII)” fetched $481,250 and the abstraction “LSH 89A” went for $277,250.

Another Harris sketch on offer had been stowed away among a late Canadian-born painter's possessions for decades, but was uncovered by relatives earlier this year. The work, which was valued between $125,000 and $175,000, went unsold.

Heffel presented 112 lots at the livestreamed auction at Toronto's Design Exchange. Bidders placed offers online, by phone or before the sale.

The auction raked in a total of $15.3 million. All amounts include auction house fees on top of the hammer price.

This report by The Canadian Press was first published July 15, 2020.