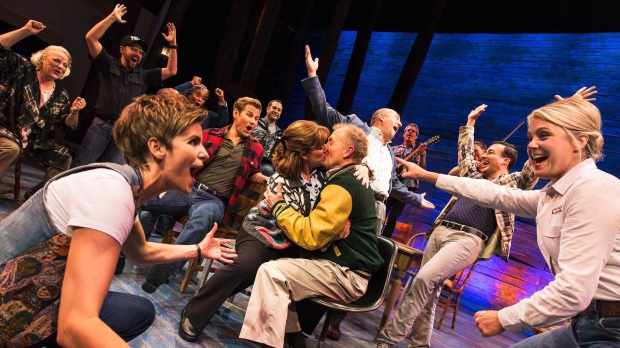 Sunday night marked the official New York opening for "Come From Away" following several weeks of previews. (Handout provided by The Canadian Press)

TORONTO - Arts impresario David Mirvish says the Toronto run of "Come From Away" will be extended until next spring after the $5-million production broke even in record time.

The show was expected to wrap up next January, but will now be moved to the Ontario Heritage Trust's Elgin Theatre for an extended run from February to late April.

To accommodate the production shuffle, Opera Atelier's April performance of Mozart's Idomeneo was moved from the Elgin to the Ed Mirvish Theatre.

"Come From Away" tells the true story of how the town of Gander, N.L., welcomed more than 7,000 stranded airline passengers after 9/11.

Mirvish says the musical's success has "befuddled all expectations" both in Toronto and on Broadway, where its feel-good charm managed to win the hearts of jaded New York theatre-goers as well as a Tony Award for best direction.