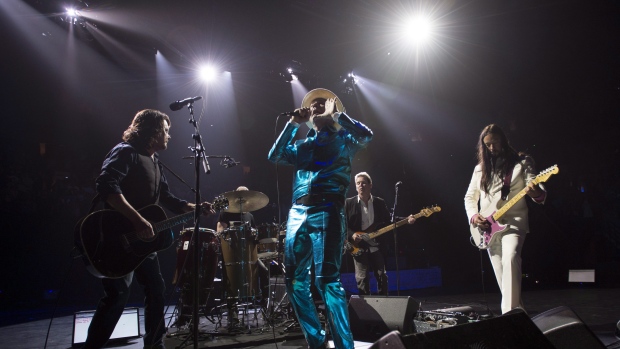 Frontman of the Tragically Hip, Gord Downie, centre, leads the band through a concert in Vancouver, Sunday, July, 24, 2016. THE CANADIAN PRESS/Jonathan Hayward

For the past four months, the legendary Toronto stage that's hosted the likes of the Rolling Stones and the Police has gone dark, and its famed checkerboard floors immortalized in the Tragically Hip's “Bobcaygeon” left empty.

Like most smaller Canadian music venues, the future is anything but certain.

“The live-venue industry right now in Canada is on the verge of bankruptcy,” Cohen said.

“We're not opening, probably, until the end of this year - maybe next year... We have no income coming in whatsoever. It's a bad scene.”

Along with several other indie concert venue owners, Cohen has been making noise about the troubling years ahead for Canada's live music scene in hopes the federal government will take more action.

There was a glimmer of hope on Tuesday when Heritage Minister Steven Guilbeault outlined a program that lets owners of for-profit venues apply for a piece of $20 million promised to support the live music sector.

The money will be divided among numerous corners of the industry, including venues, concert promoters, booking agents, managers and music festivals. The funding is part of the second phase of support in the $500-million emergency support measures introduced in May for Canada's arts and culture organizations.

Anyone who's granted approval will receive a minimum contribution of $5,000 that's supposed to last until the end of September.

Beyond the live music business, the federal government has earmarked $5 million for the recording industry that will be administered by Factor and Musicaction, which specialize in developing and supporting Canadian music talent.

Erin Benjamin, chief executive of the Canadian Live Music Association, which advocates for the industry, called the move by Canadian Heritage to support venues “a good start” that needs to be built upon in short order.

“It's better than nothing,” she said.

“It'll help some companies for a very short amount of time...but we're not done here. We can't be done.”

While Cohen doesn't know if he'll qualify for a portion of the venue funding, he's skeptical about how much it'll actually help the Horseshoe.

“I'll be able to pay two weeks of rent,” Cohen said, pointing out it's roughly $40,000 a month for the downtown location.

“It'll be something, and we'll be grateful for it... but I'm skeptical until I actually see the payments.”

He suspects the Horseshoe may also fail to meet some of the requirements outlined on the Factor website. Among them, a venue must have booked at least 50 per cent Canadian musicians at its venue last year to qualify.

“The eligibility makes no sense.”

Smaller venues have been able to tap into other financial support measures, which include the Canada Emergency Response Benefit and the emergency wage subsidy.

In Toronto, city council recently passed legislation that allows property owners to claim a tax break of 50 per cent tax on spaces that operate primarily as live music venues. The intention is for those savings to trickle down to the tenants who are still not allowed to reopen.

Live venues in other Canadian cities are at different stages in a process many anticipate could stretch well into next year.

Vancouver bars were some of the first to reopen, though several clubs in the city warned that patrons may have been exposed to COVID-19 in recent weeks.

Montreal's music venues were allowed to legally reopen in late June, but concertgoers have to remain seated and dancing is forbidden.

In Halifax, Karen Spaulding reopened the Carleton Music Bar and Grill in the final days of June, but it hardly feels the same to her.

“It is at half capacity for three days a week, instead of normally five to seven, and it's acoustic shows only,” she said.

“Just the world, the audience and the guests, all feel different.”

The Carleton operates as a restaurant, which helped Spaulding's attempt to get the business back on its feet, though she said overall revenues have dropped somewhere between 50 to 75 per cent.

But as much as she's concerned for her business, she's also worried about local Canadian musicians who relied on these venues to make a living. That's motivated her to look for solutions as she faces a long winter that brings a whole new round of questions.

Spaulding said she's been in conversations with lenders, while also tapping into other government programs that help support her staff. She's also looking into whether it would be worthwhile to launch streaming online concerts that would “put more money in the artists' pockets” over the coming months.

“I'm going to personally go out on a limb to keep the venue going,” she said.