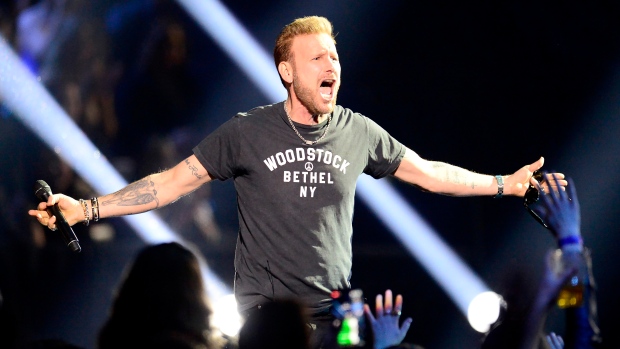 Canadian Music Hall of Fame inductee Corey Hart performs at the Juno Awards in London, Ont., Sunday, March 17, 2019. One of Corey Hart's most resilient hit singles is getting a makeover. THE CANADIAN PRESS/Frank Gunn

TORONTO - One of Corey Hart's most resilient hit singles, “Never Surrender,” is getting a makeover by the singer who's been inspired by people's unwavering strength during the COVID-19 pandemic.

The Montreal-born performer says he's written and recorded an updated version the track from his 1985 album “Boy in the Box,” and plans to debut a music video for it later this month.

“Never Surrender (Angels) 2020” takes a cue from the original, but Hart says it incorporates a new melody and lyrics that reflect his perspective as a songwriter today.

“Since the pandemic began, I've received so many heartfelt messages from people all over the world telling me how much 'Never Surrender' has meant to them during the journey of their lives, including into this new crucible we are all facing,” he said in a statement.

“It thus spurred me on to release a reworked single and video.”

Hart plans to release the updated track through digital platforms on May 29, alongside the debut of a new music video for it directed by his wife, Julie Masse.

Hart says his remake was recorded at Sanctuary Studio in Nassau, Bahamas, where he lives with his family, who all chipped in to make the video.

“As we are in a stringent lockdown here in the Bahamas we had no other alternative but do it ourselves,” he said.

“One take, with no edits, and all my children worked as team crew on the shoot.”

“Never Surrender” won the Juno Award for single of the year and is second to only “Sunglasses at Night” as Hart's most popular song.

The original recording has become a favourite of nostalgic pop listeners, and recently appeared in Netflix's “Stranger Things,” and on the ABC sitcom “The Goldbergs.”

This report by The Canadian Press was first published May 13, 2020