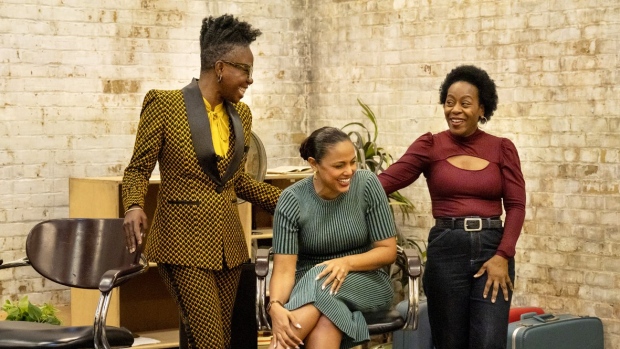 Director Weyni Mengesha, centre, is photographed with actors d'bi.young anitafrika, left, and Ordena Stephens-Thompson, during a break in rehearsals for the production of ‘'da Kink in My Hair', in Toronto, on Wednesday, November 9, 2022. THE CANADIAN PRESS/Chris Young

Weyni Mengesha didn't anticipate the amount of laughter she would share and the tears she would shed returning 20 years later to "'da Kink in My Hair."

Mengesha says directing the play a second time moved her because she grew up alongside the original cast members, who portrayed hair salon clients whose triumphs and tragedies unravel through monologues.

“Not only did we grow up together artistically doing this show for years when we were in our early 20s, but we watched each other have families,” says Mengesha, also artistic director of Soulpepper Theatre.

She oversaw the first full production of "'da Kink in My Hair" in 2003 when it premiered at the Toronto Fringe Festival.

Stellar reviews buoyed it to the Princess of Wales Theatre and ultimately, an international tour and TV series adaptation for Global which aired from 2007 to 2009.

In a collaboration with Soulpepper Theatre and TO Live, the play celebrates its 20th anniversary by bringing back several members of the original cast, including Ordena Stephens-Thompson as salon owner Novelette and d’bi.young anitafrika as both Jamaican customer Stacy-Anne and hairstylist Claudette.

The cherished smash hit will take the stage Tuesday.

She says the heart of the play is as relevant as it was the first time but that the world is more divided now.

“It’s a celebration of three things: people, place and culture,” she says. “Little Jamaica has gone through a lot in the last 20 years, so it’s an exciting way to be able to highlight what’s been happening there in that community.”

Mengesha says the play explores the progress society has made since 2003, as well as how much more needs to be done. She says she updated the script with cast members including Stephens-Thompson, anitafrika, Miranda Edwards and Satori Shakoor to reflect recent events such as the murder of George Floyd in 2020.

“We’ve seen a civil rights, global movement against police brutality on Black bodies,” she says. “We had to coin a phrase that Black Lives Matter.”

“I want us to go further than the intellectual understanding because it’s lived experiences that really make it impossible not to stand up for justice,” she says.

Mengesha says the play retains heartfelt stories from the original including that of a mother losing their child to gun violence, and discussion of other topics such as sexual assault, suicide and discrimination.

It's also an ode to the legacy of Black women’s theatre work in Canada, says anitafrika, adding that the work of Black artists isn’t remounted as often as plays of a European tradition, like Shakespeare.

anitafrika says they’re grateful to share a space with familiar actors Stephens-Thompson, Shakoor and Edwards, along with the new cast members, led by Mengesha's directing.

“If we think of the theatre industry in Canada, it’s no different from any other industry that can exclude Black people and exclude Black women,” says anitafrika, who uses they/them pronouns.

anitafrika says the play leans on the legacy of Black theatre training and technique, and is influenced by the work of poet Ahdri Zhina Mandiela, playwright Djanet Sears and theatre actors Vera Cudjoe and Rhoma Spencer.

Stephens-Thompson says the training she received from Mandiela, Sears and Cudjoe prepared her to step into the role of Novelette.

The character comes from a family of hairdressers and carries a gift for seeing into her customers' lives through their hair.

Stephens-Thompson, who portrayed Novelette on the TV show, recounts a lengthy saga to bring the stage production to the small screen that began with a one-hour pilot for VisionTV in 2004 on the heels of the stage show's success.

She says that was followed by efforts to convince broadcasters to commit to a series run, but it took two years for Anthony and the VisionTV producers to find a partner in Barna-Alper Productions and a network in Global.