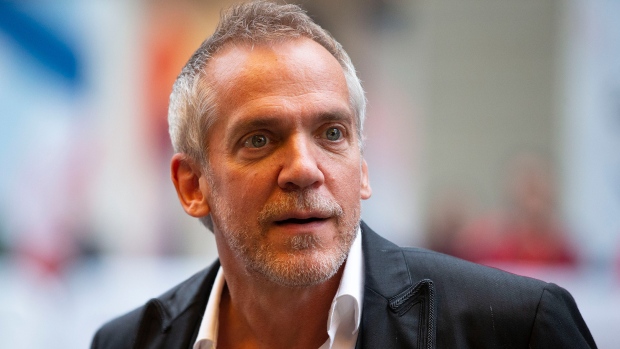 Jean-Marc Vallée arrives for the screening of the film "The Rest of Us" at the Toronto International Film Festival in Toronto on Friday , September 6, 2019. THE CANADIAN PRESS/Chris Young

Jean-Marc Vallee was nearly ready to give up filmmaking before a 2005 project turned the tides on his career, a colleague recalled days after the Quebecois director and producer died.

Vallee, who went on to direct a string of high-profile films and series after his breakout “C.R.A.Z.Y.” - winning an Emmy for the hit HBO series “Big Little Lies” and multiple nominations for the 2013 drama “Dallas Buyers Club” - died suddenly in his cabin outside Quebec City over the weekend, his representative Bumble Ward said Sunday.

Canadian producer Pierre Even, who worked with Vallee on a pair of projects including “C.R.A.Z.Y.,” said the “difficult shoot” of the 2005 film had the filmmaker wondering if he'd ever make another movie.

“We didn't have enough money, we were struggling to do everything we needed to do and Jean-Marc was saying: 'Pierre, you don't understand, this is going to be my last film,” Even said Monday in a phone interview from Montreal.

Vallee wrote, directed and co-produced the coming-of-age Quebec drama about a young gay man dealing with homophobia in the 1960s and '70s.

The movie, which earned $6 million in box office revenue in Quebec alone, was Vallee's first feature film to be both written and directed by him.

Even said Vallee, who had dreamt of creating the project for years, put “tremendous” pressure on himself to make it work. When they saw the reception of the film's premiere in Montreal, Even said they knew they had made “something special.”

“It was always a film about somebody that feels different and wants to fit in, and that's a universal theme. But we were surprised how much the audience took the film and (it) became their story,” Even said.

“During the premiere â€¦ we had people coming out of the theatre in tears saying 'that's my life.”'

Even said Vallee was already a successful director in Canadian film circles, but “C.R.A.Z.Y.” made him a global name as it screened at other festivals.

He said agents and production companies in Los Angeles were soon calling Vallee, wanting to meet him and discuss potential projects.

“I think it made people realize not only was he a good director but he could tell a story that people would want to see and that would catch audiences all over the world,” Even said.

Vallee, acclaimed for his naturalistic approach to filmmaking, directed stars including Reese Witherspoon, Nicole Kidman, Amy Adams and Jake Gyllenhaal over the past decade.

“He was a true artist and a generous, loving guy. Everyone who worked with him couldn't help but see the talent and vision he possessed,” the statement said. “He was a friend, creative partner and an older brother to me.

“The maestro will sorely be missed but it comforts knowing his beautiful style and impactful work he shared with the world will live on.”

Vallee was born in Montreal and studied filmmaking at the College Ahuntsic and the Universite du Quebec a Montreal.

He received the Directors Guild of America Award and the Primetime Emmy Award for Outstanding Directing in 2017 for the HBO Limited Series “Big Little Lies,” which he also executive produced. The series won eight Emmys and four Golden Globes in total.

He also directed and executive produced the HBO limited series “Sharp Objects” which was nominated for eight Emmys.

“A truly phenomenal talent who infused every scene with a deeply visceral, emotional truth,” the statement said. “He was also a hugely caring man who invested his whole self alongside every actor he directed.”

Even said Vallee demanded much from those who worked with him, but he was also very loyal, often bringing in Quebecois crews to work on other projects. He also edited many of his projects back home in Montreal, building a state-of-the-art editing suite in his home.

“He was so passionate,” Even said, adding that Vallee's crews needed to work hard to achieve his vision. “But even if he's asking for the moon, let's get him the moon because we know it's going to be great.”

Gavin Fernandes, a sound mixer in Montreal who worked with Vallee on a number of projects including “Dallas Buyers Club” and “Big Little Lies,” said the filmmaker was “on another level of film-making.”

Fernandes admired Vallee's ear for music, which often led to him spending large amounts of his budget on securing music rights for his films rather than rely on original scores.

Vallee was “hands on” in his editing approach, Fernandes recalled, and while the crew didn't always agree with some of his decisions in the moment, they always seemed to work out in the end.

“There were times we'd literally sit back and say 'are we sure about this?' and he'd say 'trust me,”' Fernandes said.

“And the show came out and the reviews came in, and inevitably, the thing we doubted turned out to be a really cool thing.”

Celebrities took to social media to honour Vallee on Monday.

Canadian actor Jay Baruchel said on Twitter that Vallee was “a profoundly gifted artist whose passions and efforts have advanced the medium of cinema.”

Witherspoon posted a photo of herself and Vallee on Instagram with the caption: “My heart is broken. My friend. I love you.”

Leto also shared a photo of him and Vallee on the app, crediting him with changing his life “with a beautiful movie called Dallas Buyers Club.”

Vallee is survived by his sons, Alex and Emile, and siblings Marie-Josee Vallee, Stephane Tousignant and Gerald Vallee.

Even said Vallee's impact on Canadian cinema will continue to be felt for years.

“Jean-Marc had such a personal way of filming that it's not something you can copy,” he said. “There's only one Jean-Marc Vallee and when you watch 'Big Little Lies' or 'Sharp Objects' or 'C.R.A.Z.Y.' or 'Cafe de Flore' or 'Wild,' you're going to see it's a Jean-Marc Vallee movie.

“And that quality of filmmaking â€¦ it's so rare and so precious.”

This report by The Canadian Press was first published Dec. 27, 2021.