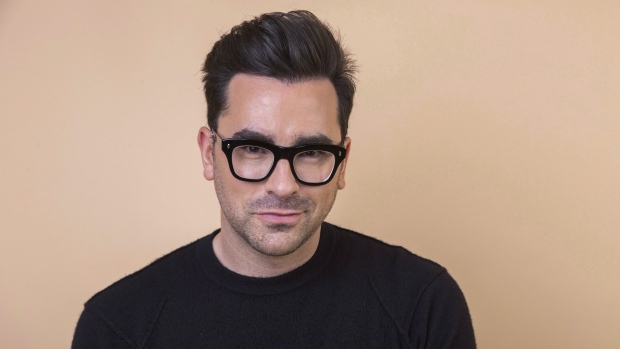 TORONTO - “Schitt's Creek” may be over but the Emmy Awards aren't done with Dan Levy.

After sweeping the top categories last year with the final season of the CBC hit comedy, Levy is up for a trophy again - this time for guest hosting “Saturday Night Live.”

He joins several Canadian Emmy contenders announced Tuesday that include a swath of homegrown artists behind the Ontario-shot “The Handmaid's Tale,” including Emmy-winning “Schitt's” costume designers Debra Hanson and Darci Cheyne in the race for best fantasy/sci-fi costumes.

Other nominees include renovation twins Jonathan and Drew Scott who are among the producers nominated for HGTV's “Property Brothers: Forever Home” in the outstanding structured reality program category. They share the category with Canadian tycoons Kevin O'Leary and Robert Herjavec as part of the producing team for ABC/CTV's “Shark Tank.”

The outspoken entrepreneurs also sit among their fellow Sharks as nominees for best reality or competition host, a category with Canadians aplenty: Toronto cookbook maven Gail Simmons joins her co-hosts as contenders for Food Network's “Top Chef,” while Montreal-bred culinary star Antoni Porowski is named alongside the other the Fab Five hosts of Netflix's “Queer Eye.”

He won 2020 Emmys for writing, co-directing and as a supporting actor on the show, which swept all seven categories it was nominated in and made history as the first comedy or drama to pick up all four acting categories.

Levy appeared in a number of the “SNL” episode's sketches, including one about the addictive pleasures of skimming online luxury real estate listings, and another where he played a tram operator on the Universal Studios Orlando backlot tour.

Meanwhile, perennial nominee Lorne Michaels, the Toronto-bred creator of “SNL,” is up for best writing for a variety series. Rivals in that category include Montreal's Barry Julien, nominated as part of the writing team on CBS/Global's “The Late Show With Stephen Colbert.” Julien and the Colbert team are also nominated for the late-night show's 2020 election night coverage in the variety special writing category.

And while Samantha Bee missed out on a fifth consecutive year among the variety talk series nominees, she was nominated in the short form non-fiction category. The Toronto native was recognized for “Pandemic Video Diaries: Vaxxed And Waxxed,” a series compiled by the host of “Full Frontal With Samantha Bee” during the COVID-19 lockdown.

Freer also got a nod for outstanding special effects in a TV season or movie for the Disney Plus series “WandaVision.”

Montreal-born composer Christophe Beck's original score for an episode of “WandaVision” earned a nomination for outstanding music composition for a limited or anthology series, movie or special.

Meanwhile, choreographer Sergio Trujillo, who was raised in Toronto, was recognized for his work on NBC's perennial special “Christmas in Rockefeller Center” which picked up a nod for outstanding choreography for variety or reality programming.

Christopher Hargadon, Heather Crepp and William Ng were nominated for costume design on “The Umbrella Academy.”

Artists from “The Handmaid's Tale” vying for hardware include: Lou Solakofski, Joe Morrow, and Sylvain Arseneault for sound mixing and Elisabeth Williams, Martha Sparrow and Larry Spittle for production design for a narrative contemporary program.

This report by The Canadian Press was first published July 13, 2021.