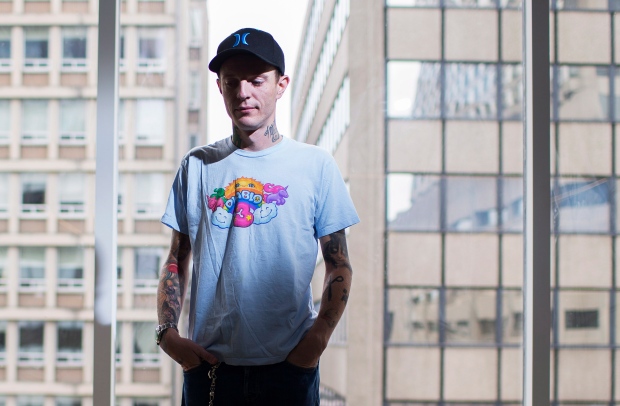 TORONTO -- Canadian dance-music star Deadmau5 has always had an uneasy relationship with the world of EDM, a short-hand classification he hates for a genre -- electronic dance music -- he frequently criticizes.

Nevertheless, he'll headline the second annual Veld Festival in Toronto on Aug. 3 and 4, where such fellow stars in the world of (gulp) EDM including Steve Aoki, Dadalife, Kaskade and ex-Swedish House Mafia member Steve Angello will seek to entertain the energized throngs at sprawling Downsview Park.

But even as the Niagara Falls, Ont., native born Joel Zimmerman prepares to "catch up and hang out" with his seldom-seen peers, he can't help but urge others in what he reluctantly refers to as the EDM scene to push the boundaries of the fledgling genre.

"I don't think enough EDM artists are taking risks right now and that's the big problem," said the 32-year-old this week in Toronto. "Everyone wants to be safe, and do that thing you know is going to work.

"Someone, please take the wheel and turn it. Not to say I'm going to be that guy and I'm going to crusade on that journey of making turbo dub neo pro step but I would just like to encourage a bit of diversity and the way that I do that is the only way I know how, which is to make some downtempo thing ... and just like flex engineering muscle on a piece or two."

That's a fairly diplomatic statement from the notoriously outspoken dance composer, whose tendency for blustery declarations and poison-tinged put-downs have inspired high-profile feuds with everyone from Madonna to DJ Pauly D while supercharging the news feeds of grateful blogs across the Internet.

Well, even while being diplomatic he slips in what could be charitably described as a backhanded compliment to one of his favoured targets, Avicii, the Swedish DJ behind "Levels." Dotting his speech with profanity and letting the words pour out at dancefloor speed, Zimmerman first says that "we can all make these one-note-wonder Avicii-sounding (songs)," then tries to bring his runaway train to an emergency stop. He's not bashing anyone, he says. Avicii is "doing his thing" and just "beat the crap out of Alan Thicke's kid" on the U.K. singles chart. (In case that reference is blurry -- he's talking about Robin Thicke).

Zimmerman, wearing a colourful T-shirt devoted to the popular dungeon crawler "Diablo III" and sipping at a steep Tim Hortons coffee, knows he has a tendency to talk, and seems to derive a certain kick from speaking out of turn even if he occasionally resents the consequences.

In part, it's because he understands that his prickly personality is as essential a part of the Deadmau5 package as his hulking novelty mouse helmets. This is a guy who both successfully proposed to a woman on social media and subsequently dissected the dissolution of their relationship via the same means (the woman in question being Kat Von D, whom journalists were specifically instructed not to mention around Zimmerman on this day).

The seeming candour that he applies to his online interactions does come at a price, but he says it's integral to building his audience.

"It's a double-edged sword. But it's easiest for me -- it's not for everyone, especially dudes who pay other dudes to ghostwrite their (stuff)," he says. "It feels more natural to me to kind of invoke a sense of community around what it is and what I'm doing, as opposed to walking everything else out and me going off on some program and making appearances once a year.

"Other people can do that. I just can't do that."

He typically releases music directly to fans as soon as it's ready, keeping his devotees nourished with a steady flow of material.

When he makes albums, they thus tend to be roundups of the stuff he's been steadily dribbling. It hasn't hurt his sales any -- 2010's "4x4

12" went platinum while 2012's "Album Title Goes Here" hit No. 2 on the Canadian album charts, with both records earning Grammy nominations -- but Zimmerman says that opting for that immediate gratification comes at the cost of having time to carefully assemble an album front-to-back, as one continuous artistic statement.

"I think I just need to accept the fact that I will never be able to produce an album from start to finish, just because of the way that I like to work on music and put it out quickly," he said.

"It would take me six months to a year to do a solid album that I'd be happy with. And man, I feel like my little section of the Internet is going to get real bored after two weeks of me not tweeting or posting up a clip or something. If I'm going to keep the whole transparency act then an album might end up as usual being another compilation of what I did that year."

He's in a space where he seems to be considering all his options. He acknowledges that he's planning a major tour for next year, but also speculates on whether his increasingly elaborate performances will eventually "hit a plateau," "because God, it just seems like the next logical step is to carve a mousehead into the moon and play on Mars."

And he muses on creating an entirely new model for releasing music.

Such a model would require that Deadmau5 maintain a consistently high level of output regardless of other circumstances in his life, but he dismisses any such concerns.

"What the (hell) else is there?" he says, using a harsher profanity. "Jetskiing, cats, drugs -- I don't know. No, that's what I choose to do with my life, you know what I mean? @It's not really pressure, it's just commitment.

"I could play the game just like anyone else can," he adds. "(Hell), if Avicii can do it, why can't I? Or anyone else for that matter."