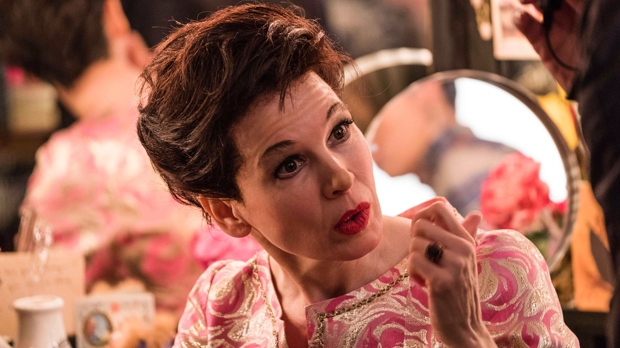 TORONTO -- A well-made biopic can make viewers feel more intimately connected with notable people than even a documentary can, say filmmakers who are mining the biographies of movers and shakers for projects presented at the Toronto International Film Festival.

This year's TIFF schedule is packed with heavy-hitters in the genre, including “Judy” with Renee Zellweger portraying Hollywood icon Judy Garland in the final year of her life; “A Beautiful Day in the Neighborhood,” with Tom Hanks as children's TV host Fred Rogers; “Dolemite Is My Name” in which Eddie Murphy plays comedian Rudy Ray Moore; “Radioactive” about two-time Nobel Prize winner Marie Curie played by Rosamund Pike; and “Harriet” starring Cynthia Erivo as abolitionist Harriet Tubman.

Over the past year, biopics have even proven to be Oscar-worthy and stolen the show - for instance “Bohemian Rhapsody,” about Queen frontman Freddie Mercury.

Rupert Goold, director of “Judy,” says biopics can provide a window into the lesser known lives of some of the world's most iconic stars, politicians and fugitives.

“It's a bit of a contradiction in that a biopic, which of course is a kind of form of fiction, might create a reality more real than documentary or public record,” said Goold.

“Judy,” an adaptation of Peter Quilter's stage play “End of the Rainbow,” presents an intimate portrait of Garland, star of 1939's “The Wizard of Oz” and 1954's “A Star is Born,” in the final year of her life.

One difficult aspect when creating a biopic, Goold said, is encompassing a whole life.

“What feature films do is show a single action in a character's life and that's what we're trying to do with this, is really look at this last part of her life and see who we find there, what matters to her as that Judy rather than the Judy you might know from 'A Star Is Born,”' he said.

TIFF programmer Ravi Srinivasan said biopics appeal to the festival's core audience of boomers and gen-Xers, specifying that musical biopics were growing in popularity among millennials.

“That is the core audience of festivals in general, is the boomer audience, but I think that the music aspect is also trickling down to the younger generation who are now just discovering this style of music.”

But with more liberties being taken among filmmakers, “American Woman” director Semi Chellas said what constitutes as a biopic has been up for debate.

Chellas' film was inspired by Susan Choi's fictional book, “American Woman,” which was based on the infamous 1974 kidnapping of Patty Hearst, granddaughter of American publishing magnate William Randolph Hearst. Patty Hearst was abducted and radicalized by left-wing terrorist group the Symbionese Liberation Army.

The film is a re-imagining of the kidnapping, told through the eyes of Jenny, played by Hong Chau, a dedicated underground activist tasked with keeping a group of radicals off the grid. Jenny develops a relationship with Pauline, played by Sarah Gadon, a character who comes from a wealthy family and seemingly develops a loyalty to her captors.

“It's a weird relationship to a biopic, because it's not actually trying to be that story and yet it's so obviously interwoven with that story,” said Chellas. “It's such a cliche that the truth is stranger than fiction but it is so often true. Whatever I could make up, whatever I could bring from my own experience could never get close to true life events.”

For Chellas, creating a biopic is a way of filling a “blank spot” between the fragments of what is known about a story and painting a picture of the parts the public never gets to see.

Chellas said her favourite films are about larger-than-life duos who shake the world to its core, listing 1930s American crime couple Bonnie and Clyde and Thelma and Louise, characters in the 1991 Academy Award winning movie about two best friends who drive out of town together on an adventure.

“What does transpire between them? Is it friendship? Is it love? Is it real? Is it brainwashing? Is all love brainwashing?” Chellas said of “American Woman”'s protagonists, adding that the greatest inspiration for storytellers is “when they come across those characters in life that are hard to know and ask us to imagine our way into their stories.”

This is true for Dan Beirne, star of Matthew Rankin's “The Twentieth Century,” described as a “bizarro biopic” on the early life of former Prime Minister William Lyon Mackenzie King.

“Generally biopics are attractive because they are self-contained - the story, the foundation is there, because writing is difficult. I think people respond to a true story so much quicker,” said Beirne. “It's like, well, we have this pre-existing narrative and we can then just write on top of it.”

Beirne, whose film is screening as part of the festival's Midnight Madness program, said Canada's 10th prime minister was a life-long diarist, whose life only became highly documented after he won the election.

But “fetishistic” liberties have been taken in “The Twentieth Century,” Rankin admits.

A TIFF description of the film states it plays “fast and loose with history,” depicting a depressed portrait of King as romantically rejected and “driven to unconventional forms of sexual gratification” with women's footwear.

“This is the least-documented part of King's life,” Rankin said. “There's less of a record and because of that, it feels a little more fluid and you can expand and emphasize and embellish.”