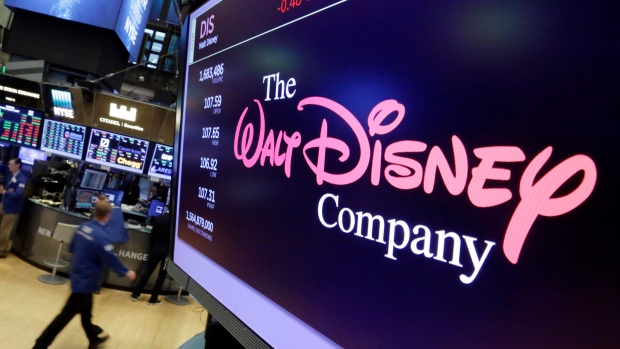 FILE - In this Aug. 8, 2017, file photo, The Walt Disney Co. logo appears on a screen above the floor of the New York Stock Exchange. On Tuesday, Nov. 12, Disney Plus launches its streaming service. (AP Photo/Richard Drew, File)

TORONTO - Disney Plus got off to a strong start on Tuesday by tossing Canadian viewers a bone - and it wasn't just a remake of “Lady and the Tramp.”

The Walt Disney Company's new subscription platform unveiled a comprehensive offering of nearly 500 films and 7,500 episodes of TV shows, and the lineup almost mirrored what was available on the same-day launch in the United States.

For a country that's spent years paying for what many feel is a lesser Netflix Canada, and waited patiently for other U.S. streaming competitors to shuffle into the Canadian market, the practically seamless reveal of the Disney Plus selection was a welcome revelation, said media and technology analyst Carmi Levy.

“We are getting largely what our American neighbours are getting for a roughly similar price,” he said.

“There are almost no drawbacks to being a Canadian here... you're finally getting what you've been hoping for.”

And whether you're interested in Marvel's blockbuster “Black Panther,” or older titles such as Bette Midler comedy “Big Business,” almost all of the titles available on Disney Plus match on both sides of the border.

There are a small number of expectations, such as “High School Musical 2,” and Marvel TV series “X-Men: Evolution” and “Runaways,” which are not streamable in Canada.

A couple years ago that easy access to entertainment would have been unthinkable because the rights to TV and films were locked in a complicated web of negotiations and long-term deals.

The old way of licensing rights worked by territories, and a distributor such as Disney or Warner Bros. would sign agreements that locked up packs of their titles with a broadcaster or streamer. When the streaming industry developed, those deals became a competitive setback because it only built walls around the programming.

For instance, a popular show like “American Horror Story” would be available on Netflix in the U.S., but tied up in a different agreement for Canada, which meant Netflix couldn't carry it here.

Disney is among the entertainment industry giants that's spent the past decade pulling back those rights with an eye on launching its own streaming platform. The company also spent billions buying up other valuable Hollywood businesses with their own stockpiles of entertainment - in particular 20th Century Fox earlier this year.

The goal is to emerge from the ongoing battle for viewership dollars with a dominant position, but with it Disney gets more control over its own titles and how much it charges to access them.

In Canada, Disney Plus costs $8.99 per month, or $89.99 per year, for a vast selection of offerings from Disney's many brands, which include Pixar, Marvel and National Geographic. There's also an array of original shows and films, including the Star Wars spinoff TV series “The Mandalorian,” an episodic update to “High School Musical,” and that remake of “Lady and the Tramp.”

The streaming service also comes stacked with an extensive library of Disney titles, which range from animated classics “The Lion King” to Disney TV movies from decades past, and selections from the Fox library, including “Never Been Kissed,” “The Sound of Music” and “Home Alone.”

“It's nothing short of a broadside against Netflix,” Levy said of Disney's biggest competitor, which is constantly beefing up its own “original content” arsenal.

“They're coming in with competitive pricing, but more importantly the kind of content that literally no one else can match.”

But launching a streaming service involves more than just beefing up content, as became clear on Tuesday morning when Disney Plus began to experience an array of problems that left many new subscribers locked out of their accounts or facing various technical glitches.

Some posted screenshots of error messages that showed characters from Disney's animated movies “Wreck-It Ralph” and “Ralph Breaks the Internet.”

Other users in several regions of Canada said they received error messages which blocked them from the service, telling them they lived outside the countries where Disney Plus was available.

A representative for Disney provided a written statement on the widespread problems on its highly anticipated launch date, but did not address the specific technical glitch.

“The consumer demand for Disney Plus has exceeded our high expectations,” wrote spokesman Peter Pitino.

“We are pleased by this incredible response and are working to quickly resolve the current user issue. We appreciate your patience.”

Disney is banking on its appeal out of the gate, with Disney Plus launching in North America across nearly all major mobile and connected TV devices. That'll give viewers an opportunity to sign up whether they use Apple, Google, Microsoft, Roku or Sony products.

Viewers can sample the service with a free seven-day trial.