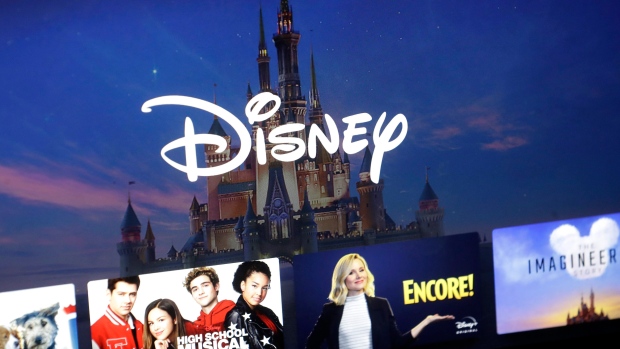 A Disney logo forms part of a menu for the Disney Plus movie and entertainment streaming service on a computer screen in Walpole, Mass., Wednesday, Nov. 13, 2019. Disney Plus says it hit more than 10 million sign-ups on its first day of launch, far exceeding expectations. (AP Photo/Steven Senne)

TORONTO - Disney Plus is warning subscribers that some of Walt Disney's most beloved classics might contain “outdated cultural depictions.”

A number of films available on the streaming platform, which launched Tuesday, included cautionary notes in the plot descriptions about problematic representations in some of the characters.

Numerous titles from Disney's extensive library carry the warning, among them “Peter Pan,” a 1953 film long criticized for its stereotypical depiction of Indigenous people, and “The Aristocats,” a 1970 production which features a Siamese cat playing piano with chopsticks.

The warning on Disney Plus reads: “This program is presented as originally created. It may contain outdated cultural depictions.”

Disney doesn't outline how each film might be considered insensitive by today's standards beyond its single-sentence notice.

Other titles which carry the alert include “The Jungle Book,” the 1940 version of “Swiss Family Robinson” and the studio's early Silly Symphony animated shorts, some which feature Mickey Mouse.

Disney Plus is also including warnings about tobacco use in “Pinocchio,” “Aladdin” and other films.

Before the streaming service launched, Disney was faced with how to present nearly a century of family entertainment history, while also recognizing that many parents don't want their young children to encounter racist depictions or culturally insensitive films without context.

Early reports suggested the studio would remove a scene of crows from “Dumbo,” which features a bird named Jim Crow, but on Disney Plus the scene remains as it was originally released, with the additional warning.

At least one of Disney's other classic titles, which includes smoking, has gone unaltered on the streaming platform.

The 1948 film “Melody Time” came under scrutiny in the late 1990s when Disney digitally removed a cigarette from Pecos Bill's mouth for the DVD release. The streaming version keeps the original cigarette intact, but strangely doesn't include a tobacco warning.

But Disney's decision to forgo warnings on its more contemporary films may raise a few eyebrows.

For instance, 1992's “Aladdin” carries a tobacco warning, but doesn't note any issues with the “cultural depictions,” though some critics have noted the film mainly uses Arabic accents on the key villains, but American accents on the lead heroes.

In the past, Disney took a different route by burying one of its most problematic titles “Song of the South.” The 1946 musical is best known for the song “Zip-a-Dee-Doo-Dah,” but also what many critics consider a minstrelsy portrayal of post-Civil War plantation workers.

Disney Plus hasn't made “Song of the South” available, and the film has largely been out of circulation for decades.

For its newest films, Disney Plus is reworking some of its classic scripts with cultural sensitivity in mind.

A live-action remake of “Lady and the Tramp” substitutes the animated version's two villainous Siamese cats with a new set of tabby cats and a different musical number.