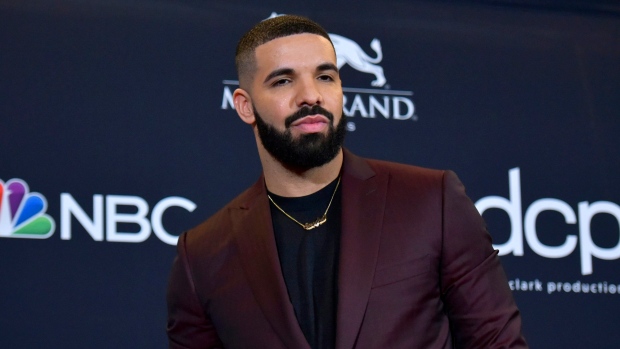 This May 1, 2019 file photo shows Drake at the Billboard Music Awards in Las Vegas. Drake is putting himself ahead of the Beatles after recently shattering another of the Fab Four's chart records. THE CANADIAN PRESS/AP-Photo by Richard Shotwell/Invision/AP, File

TORONTO - Drake is putting himself ahead of The Beatles after recently shattering another of the Fab Four's chart records.

The Toronto rapper posted a photograph on his Instagram Monday that appears to show a new tattoo on his forearm -- an illustration of the British band crossing Abbey Road while Drake stands at the front of the line, waving at them.

His ink reveal comes after Drake passed The Beatles for the most charted songs in the Top 10 of the Billboard Hot 100 in June.

He now holds 35 songs in the upper echelons of the chart, compared to the Beatles' 34.

Drake has long maintained a one-sided rivalry with the iconic British band. After shattering their record of 12 hit singles in a year in 2018, Drake jumped on Meek Mill's track "Going Bad" to proclaim that he's "got more slaps than The Beatles."

Nobody: Me: Somebody play Whole Lotta Red