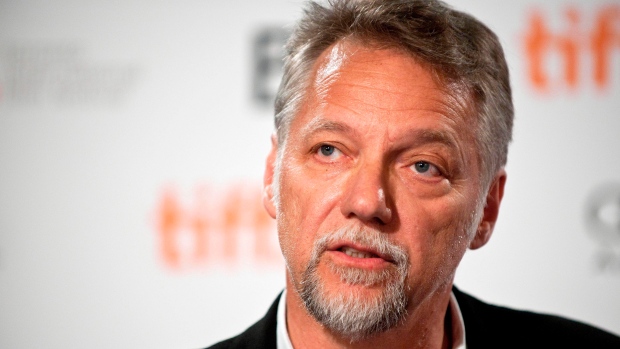 In this file photo, Edward Burtynsky speaks at a press conference to announce the line-up of Canadian films that will be screened at the Toronto International Film Festival, in Toronto on August 7, 2013. THE CANADIAN PRESS/Galit Rodan

The three will headline the annual arts and culture event, which will feature free film and digital experiences and a drive-in concert Oct. 13 to 17.

Luminato will announce details on where to find the programming throughout the summer.

Originally slated for June, the festival's 15th edition was postponed to October due to provincial COVID-19 restrictions, which forced last year's event to be held virtually.

Burtynsky, co-director of environmental documentary films including “Manufactured Landscapes,” will present the world premiere of “In the Wake of Progress.”

The piece is described as an “immersive digital experience” created for Luminato's online audience and the screens surrounding Toronto's Yonge-Dundas Square.

Acclaimed music maker Bob Ezrin co-produced the project, which explores humanity's impact on the planet through photographs and film from Burtynsky's 40-year career.

Phil Strong created the original soundtrack with singer iskwÄ“ and musicians of the Glenn Gould School at the Royal Conservatory of Music.

More than 40 dancers perform on the shores of Lake Ontario in the piece, which explores colonization and “a more hopeful and equitable future,” says a statement.

Brubaker, along with Constantine X. Anastasakis, co-created the world premiere of “Henry G20,” described as both an augmented reality experience and a downloadable play available through a mobile app.

The festival says the piece adapts Shakespeare's “Henry V” in “a bold retelling of the conflict between police and protestors during the June 2010 G20 Summit in Toronto.”

And star soprano Measha Brueggergosman will perform a Sunday morning drive-in concert, Measha's Gospel Brunch, with hymns drawing from her roots as a fifth-generation descendant of emancipated enslaved people.