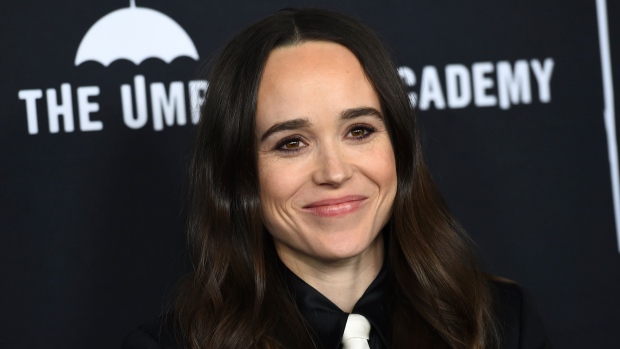 FILE - Elliot Page arrives at the Los Angeles premiere of "The Umbrella Academy" on Feb. 12, 2019. (Photo by Jordan Strauss/Invision/AP, File)

TORONTO - One of the first things Alexandher Brandy wanted to do after reading Elliot Page's coming out letter was break into a dance.

The urge to celebrate the Oscar-nominated performer's announcement was undeniable.

So as the business day ended at his retail job in the city's Gay Village, the Toronto artist gave in to the sensation.

“I don't know what energy I had, but I was literally just running around a store that was completely empty - dancing,” he said.

Someone as famous as Page saying they are transgender (using the pronouns he/they) and non-binary, meaning their gender identity is neither man nor woman, is almost unheard of. Page's message was heartfelt, written with a mixture of confidence and vulnerability that many in the community feel about sharing their own story with others.

For Brandy, who is trans masculine, it was validation.

“I'm just excited to have someone that I can be like, 'Hey, that's a famous person and people are going to understand me more because this person is like me,”' Brandy added.

“It's so weird that still exists in our world.”

Later this month, Brandy plans to throw an unofficial coming out party for Page over a Twitch live stream, called the House Royale, with trans and non-binary entertainers filling the evening. It's a way for the community to hold this moment as their own, he said.

But for many trans and non-binary Canadians, all the joy of Page's coming out is also built upon knowing this is merely an inch towards the goal of being recognized as equals in society.

Those sentiments were shared this week as they read and re-read through Page's social media letter, hanging onto every sentence.

His words were at once certain and cautious, recognizing the harsh realities of trans people who don't share the same privilege of celebrity.

Luiza Alves, a musician based in Victoria, B.C., believes there's reason to feel optimistic for whatever lies ahead. She said the non-binary community is “gaining a voice” and advocate in Page that has rarely, if ever, been present at this level of fame.

But she knows from her own experience that sharing such a truth isn't easy. It comes with endless questions from friends and family; people using their birth name rather than their chosen name, either by accident or on purpose; and these days figuring out what to share on social media. Page's coming out will certainly be no different.

“I wish I could hug them many, many times because it's going to be rough,” she said.

“It's an ongoing process, but I think overall that's the beauty of accepting yourself for who you are. It's going through thisâ€¦ and letting people around you start to discover it with you, be comfortable with you. I think it's a beautiful, painful journey.”

Faelix Kayn, a Toronto-based consultant, is more hesitant to start throwing confetti over the arrival of Page in the trans and non-binary community.

While having a famous person bring new awareness is “wonderful,” Kayn notes there are deep systemic issues and barriers affecting trans people, saying most of them don't receive nearly enough attention.

Those include transphobia in homeless shelters, a problem that's only worsened in the pandemic, Kayn said, as well as binary markers on some health and government documents.

Kayn is also concerned with the invasive and sometimes negative curiosity that plays out on social media once someone of Page's stature is involved.

Shortly after the “Gaycation” and “Juno” star's social media post, people were already speculating about personal topics such as the likelihood of a physical transition and whether he's planning to start using hormones.

All of those conversations can deeply affect individuals still grappling with their identity, Kayn added.

“I'm thinking of the younger, not out, non-binary people seeing this and thinking, `Am I going to be subjected to this dehumanization? To this level of interrogation? Is it worth it?”' Kayn said.

Gemma Hickey, an author based in St. John's, N.L., has run through similar questions in their head over several decades of activism.

Known for being the first Canadian to get a non-binary birth certificate in 2017, Hickey said it often feels isolating when there are few others who want to stand in the public spotlight as they push for change.

“You're putting yourself at risk for having to defend your choice, your name or your pronouns, even having to look over your shoulder,” they said.

“What Elliot coming out in a public way means for me and so many others is that you're not alone.”