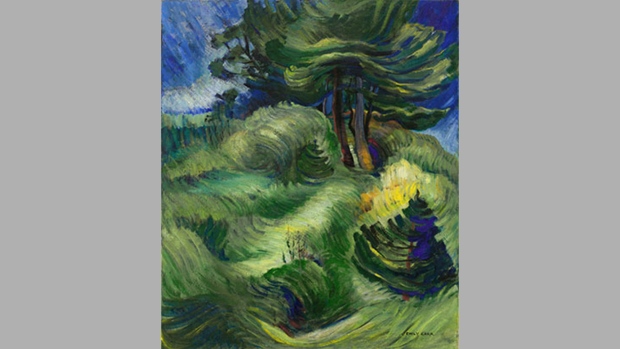 Emily Carr's 1939 forest scene, "Tossed by the Wind," is shown in this handout image. A couple of major canvases by Emily Carr are among the prized pieces set to lead a Toronto auction house's spring sale. The Heffel Fine Art Auction House will take bids on the two paintings from Carr's mature period at a virtual live auction on Wednesday night. THE CANADIAN PRESS/HO-Heffel Fine Art Auction House-Ward Bastian

TORONTO - A mature-period canvas by Emily Carr fetched more than $3 million at a Toronto auction, making it one of the most valuable works by the B.C. artist to come to market.

The 1939 forest scene “Tossed by the Wind” hammered down for $3.1 million - roughly twice its pre-sale estimate of between $1.2 million and $1.6 million - at the Heffel Fine Art Auction House's virtual live sale Wednesday.

Another of Carr's later compositions, 1937's “Swirl,” which she gifted to contemporary Lawren Harris, exceeded expectations with a $2.3 million sale.

Heffel says the two paintings rank among the four highest-priced Carr works ever sold at auction. All prices include auction house fees.

However, several marquee lots in Heffel's spring catalogue flopped on the auction block.

Another big-ticket that failed to find a buyer was French artist Fernand Leger's “Peinture imaginaire,” which was estimated to be worth between $1.5 million and $2 million.

Six of the eight works on offer by Quebec abstractionist Jean Paul Riopelle sold. But the large-scale “Sans tire,” a mixed-media triptych with a pre-sale estimate of between $400,000 and $600,000, remains on the market.

A Heffel spokeswoman said there is post-auction interest in some of the pieces that didn't meet their reserve price, and more than 93 per cent of the 92 works on offer were auctioned off.

It was also a record-setting sale for two notable women in Canadian art.

A 1960 canvas “Terme de la nuit” by Rita Letendre, who is associated with Quebec's Les Automatistes, sold for $289,250 - more than five times its pre-auction estimate.

There was also fierce bidding over “A Green Pool, French River, Canada,” by British artist Frances Anne Hopkins, whose works are considered important records of 19th century Canadian history. The piece, painted in 1864, sold for $193,250.