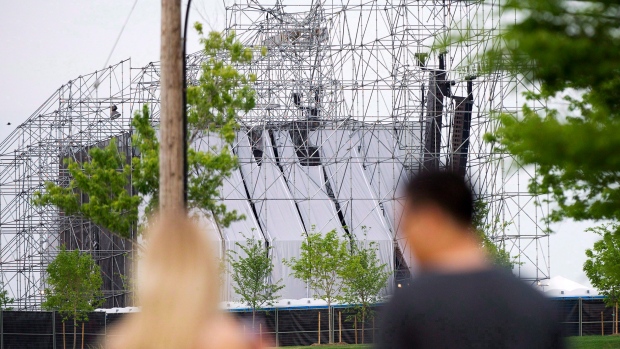 People look at a collapsed stage at Downsview Park in Toronto on June 16, 2012. The members of Radiohead say they are "appalled" that charges stemming from a fatal concert stage collapse in Toronto in 2012 were stayed. On Tuesday, a judge ruled the justice system had failed by allowing the case to take far too long to come to trial. THE CANADIAN PRESS/Nathan Denette

TORONTO - An engineer who signed off on a Radiohead concert stage that collapsed and killed a drum technician has been found guilty of professional misconduct, but the finding has provided little comfort to the family of the man who died.

Domenic Cugliari agreed last week to conclusions reached by the discipline committee of the Professional Engineers Ontario in the June 16, 2012 incident that killed Scott Johnson.

Johnson, 33, was tuning a drum kit for the band before their concert at Toronto's Downsview Park when the massive outdoor stage structure collapsed on him. Three others were injured.

Last week, the discipline committee found Cugliari had not noticed numerous errors and omissions in design drawings for the stage and consequently failed to revise the plans.

It also found Cugliari did not examine trusses holding heavy lighting equipment and failed to realize those trusses were incorrectly connected to other beams.

Johnson's father said the drawn-out process of seeking accountability in their son's death - which has included a court case and an inquest - has taken a toll.

“Not knowing the outcome for eight years does destroy you,” an emotional Ken Johnson said in a phone interview from his home in Doncaster, England.

The elder Johnson noted that Cugliari's agreement with the discipline commitee's findings could have helped bring justice had it come earlier .

“If this had been said on day one of the court case, they wouldn't have gotten away with ... getting the case thrown out because it was going on too long,” he said.

A court case fell apart after the matter took too long to get to trial. As a result, occupational health and safety charges were stayed against Cugliari, as well as the show's promoter Live Nation and contractor Optex Staging.

A coroner's inquest into Johnson's death last year heard that plans for the stage were riddled with mistakes, the wrong building components were used in key areas, and the construction was running behind schedule.

Cugliari testified at the inquest that he did not check to see if the correct parts were used because he trusted the contractor.

The criteria of the inquest was not to lay blame, and a jury returned with a slew of recommendations designed to prevent future deaths.

The Professional Engineers Ontario discipline committee found that Cugliari signed off on a “field review report” sent to the contractor that said the stage was “structurally sound.”

At the committee hearing, Cugliari said he was sorry for what happened.

“At this time, I would like to sincerely apologize to the Johnson family, to the families of the other injured workers, as well as to the engineering profession,” he said, according to his lawyer, Scott Thompson.

“I regret having issued the field review report stating that the stage was structurally sound and satisfactory for its intended use without thoroughly ensuring that the proper pick-up trusses had been installed. For that I am truly sorry.”

“We do not know what pain he was in or for how long,” he said of his son. “We were not there to help him, how sad.”

“These admissions are eight years too late,” the band wrote on social media.

“If the evidence now accepted by Mr. Cugliari had been agreed at the original court case brought against him, Live Nation and the contractor Optex Staging, it would have been complete in one day, with a very different outcome and some justice would have been delivered.”

Last year, at the outset of the disciplinary committee proceedings, Cugliari had tried to get out of the proceedings, filing a motion saying Professional Engineers Ontario had no jurisdiction because he had retired. The committee dismissed the motion.

Cugliari had his engineering licence revoked as a result of the commitee's findings, and his company, Construction Control Inc., which declared bankruptcy in 2018, lost its licence. Should the company wish to apply for a certificate with the association, it would have to pay a $5,000 fine.

The elder Johnson said he couldn't believe the only penalty that ultimately resulted from the collapse that killed his son was the revocation of a licence from a retired engineer.

The couple is left with memories of their boy - their only child -and sad trips to the cemetery.

“They say that time is a healer,” Ken Johnson said through tears.

“If anyone wants to make that statement, they should come along to the graveyard and have a chat with him. It doesn't get better, it really does not. It's a rotten, awful, awful situation.”