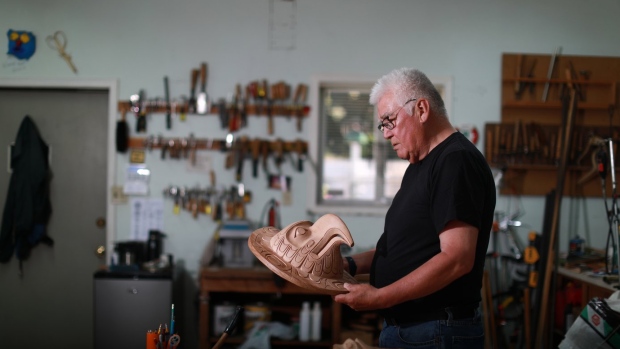 First Nations artist Richard Hunt began carving at the age of 13 now at 71 he continues to hone his skills as he works on his latest piece the Sun Mask using red cedar to create his one of a kind artwork at his studio in Victoria, B.C., on Thursday, June 30, 2022 THE CANADIAN PRESS/Chad Hipolito

First Nations art, from hand-carved masks to totem poles, draws on generations of tradition and skill and can take months to craft.

But a flood of fakes and commercial knock-offs produced in Asia and eastern Europe are exploiting Indigenous culture, the artists say, and robbing them of revenue.

One of the well-known Indigenous artists to have images of their work reproduced without permission is British Columbia carver Richard Hunt.

“I’ve stopped people making postcards of my work I’ve found out about. In Bali, Indonesia, they are making northwest coast masks. They are selling them as Indigenous,” he said.

“These things have got to be stopped. We need the government’s help. It’s like the dreamcatcher coming from Taiwan or China. Buyer beware.”

The federal government is facing calls to take action, including from a senator who wants a reform to copyright law, a unit to help Indigenous artists track down fakes and stronger border checks for art in Indigenous styles.

Hunt said raising tariffs on imports of copies could slow them down but he said the fakes were being mass produced, undercutting genuine Indigenous artists and making it harder for young First Nations carvers to make a living in what he said is a $1-billion industry.

Sen. Patricia Bovey, the first art historian to sit in the Senate, said the industry of fake Indigenous art may be worth millions of dollars and breaches artists’ intellectual property rights.

She is lobbying the government to reform copyright law to give more protection to Indigenous artists against unscrupulous businesses reproducing their images without their knowledge.

The unauthorized and fake Indigenous works range from reproductions of First Nations art on T-shirts, bedspreads, plastic bowls and bags, to carved masks and totem poles made from wood grown in Southeast Asia.

Many of these are near-exact copies of original works in galleries in Canada and the problem is acute with West Coast art.

Bovey wants ministers to set up a unit to help Indigenous artists whose work is being reproduced without their knowledge track down and chase those who infringed their copyright, at least so they get paid.

Not only are Indigenous artists having their creations purloined, she says, but people buying Indigenous work in Canada and abroad may have little idea it may be fake or has been produced without the artist’s permission.

Bovey was shocked to find that some images on orange T-shirts made following the discovery of unmarked graves last year were reproduced without the artists' knowledge by companies making a profit, not raising funds for Indigenous causes.

She warns buyers of Indigenous work to ask before they purchase where the work came from, whether it was made with the permission of the artist and whether the artist is being paid.

“This is a really serious issue,” she said. “It’s plagiarizing the work, it’s appropriating the work and both are wrong and the artists don’t have the resources to fight all this in the court.”

Helping Indigenous artists reclaim their copyright would be an example of “reconcili-action,” the senator added.

She wants an upcoming review of the Copyright Act by Heritage Minister Pablo Rodriguez and Minister of Innovation and Science Francois-Phillippe Champagne to include protections for Indigenous works, which she says are integral to Canada's culture and history.

Not only should there be specific safeguards for artists but a mechanism to track down companies fabricating Indigenous works, or failing to pay artists’ royalties, including in China and eastern Europe, she said.

“We all have a responsibility for this. We need to find ways to support artists who are maligned that way to have legal funds,” she said.

Alex Wellstead, spokesman for Champagne, said the review of the Copyright Act would “further protect artists and creators and copyright holders.”

He said “Indigenous Peoples and artists will be consulted in the process.”

Current copyright law offers protection for Indigenous craftsmen and women, including Inuit sculptors and jewellers, but Bovey said the process is so complex and time-consuming to chase, few artists have the time to pursue it.

She also wants closer checks at borders and investigations of the provenance and destination of art in Canadian Indigenous styles, particularly made from wood that is not native to Canada.

Fake masks and Indigenous carvings have been openly sold to tourists in Vancouver as genuine, according to Lucinda Turner, an apprentice to Nisg’aa sculptor and totem pole carver Norman Tait.

Turner, who died this week, spent years listing, tracking and challenging fraudulent Indigenous works claiming to be authentic, and lectured on the subject.

Hunt said she had done much to draw attention to the illicit trade, and had helped many Indigenous artists claim their copyright.

In an open letter to the government last November Turner said over 1,000 appropriated images were removed after she and others wrote takedown letters supporting artists whose copyright had been breached.

In a lecture to the Burke Museum of Natural History and Culture in Seattle, she said a few copied carvings in mahogany were so authentic-looking that they have been hung in Canadian galleries.

Among the fakes she identified are reproductions of 19th-century carvings in major museums, such as a beaver rattle from the British Museum, and copies of works by contemporary northwest coast artists including acclaimed carver Bill Reid.

She lobbied the federal government for greater protection for Indigenous artists, calling for a law, as in the United States, with huge fines for selling Indigenous work that is not genuine.

The U.S. Indian Arts and Crafts Act criminalizes misrepresentation and copying of Indigenous art. There is also a fake art hotline south of the border to make reporting of unauthorized copies easy.

In the open letter to the federal government, she called for action to tackle misrepresentations on the online market.

Well-intentioned buyers trying to support the Orange Shirt movement had been duped into buying clothing that Indigenous people would gain nothing from — including the artists whose images had been used, she said.

The Missing and Murdered Indigenous Women and Girls movement was also exploited by money-making businesses making handbags, T-shirts with Indigenous images without the artists’ permission, she warned.

The internet has led to mass marketing of fraudulent, copied or stolen images of art and ceremonial artifacts by companies with no links to the Indigenous artists, she said.

Bovey, who says she plans to raise the issue again with ministers when the Senate returns from its summer break, said few people realize that Indigenous art on sale in Canadian stores could be made in China, eastern Europe and Taiwan.

“The buyers don’t know, the artists don’t have the means to monitor it and the predators are having a great time,” she said. “It’s theft of their iconography. It’s stealing people’s cultural heritage and it is both morally and legally wrong.”

The Canada Border Services Agency said there were currently “no import restrictions related to items that imitate Indigenous art.”

This report by The Canadian Press was first published July 7, 2022.