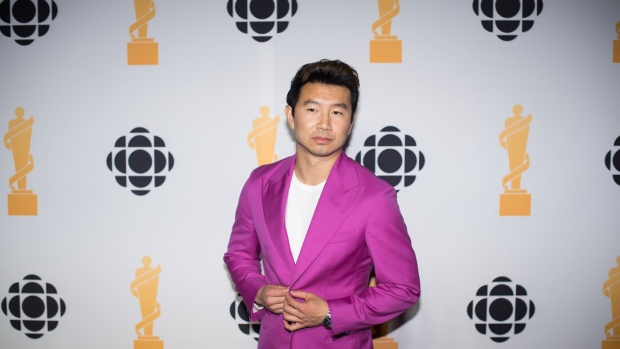 Simu Liu poses for a photograph at the media wall after hosting the 2022 Juno Awards Broadcast at the Budweiser Stage in Toronto, Sunday, May 15, 2022. Organizers at the Canadian Academy of Recording Arts and Sciences announced Wednesday that actor/author/social media phenom Simu Liu will take the reins of Canada's biggest night in music for the second year in a row. THE CANADIAN PRESS/ Tijana Martin

Film star Simu Liu is returning as host of the Juno Awards.

Organizers at the Canadian Academy of Recording Arts and Sciences announced Wednesday that the actor/author/social media phenom will take the reins of Canada's biggest night in music for the second year in a row.

Liu took to the Junos stage as host for the first time earlier this year, performing a rendition of Avril Lavigne's "Complicated."

Liu made a name for himself on the CBC-TV show "Kim's Convenience" before becoming an international movie star playing the titular role in Marvel's "Shang-Chi and the Legend of the Ten Rings."

The 52nd Juno Awards are scheduled for March 13 in Edmonton — a Monday instead of the usual Sunday celebration. It's set to air on CBC properties including CBC-TV and CBC Gem.

Juno organizers said earlier this year that it would hold the ceremony one day later than planned so as not to compete with the Academy Awards.

HE’S BACK! @SimuLiu will be hosting the 2023 @TheJUNOAwards featuring performances by @Nickelback, @TateMcRae and more! March 13th, 2023 in #Edmonton. Tickets on sale now: https://t.co/mqhf7liSWL pic.twitter.com/sMc1RnYJut