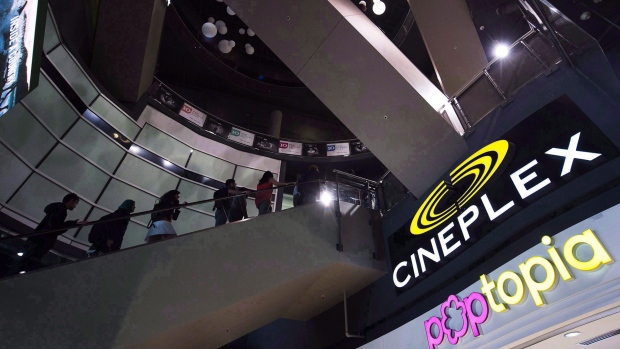 People make their way an escalator at the Cineplex Entertainment company's annual general meeting in Toronto on May 17, 2017. THE CANADIAN PRESS/Nathan Denette

The province's Stage 3 reopening guidelines cap a movie theatre's occupancy at 50 guests per building, regardless of how many screens it operates.

But Ford says he agrees with Cineplex's suggestion that it doesn't make financial sense to reopen a theatre with about a dozen auditoriums, only to "put two or three people in each cinema."

Cineplex has asked the province to reconsider the current rule, saying it would lose money by reopening locations in the province.

Ford says Cineplex's proposal is "on the table," but that any changes would have to be approved by the chief medical officer.

He says health officials would like to see the number of COVID-19 cases on a steady decline first.

"If they feel like we just aren't ready yet, then we aren't ready," Ford said at a news conference on Friday.

"But hopefully as the numbers decline -- and hopefully they're going to continue to decline outside of the couple of (increases) we've seen last few days -- then I think they'd be more flexible."

This report by The Canadian Press was first published on July 24, 2020.