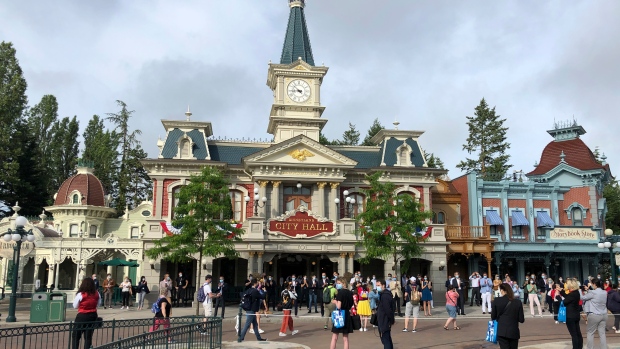 PARIS (AP) - France's tourism sector is taking a further step toward normality with the reopening of Disneyland Paris, two weeks after the country reopened its borders to vaccinated visitors from across the world.

Europe's most frequented theme park in Marne-la-Vallee, east of the French capital, opened its doors on Thursday after nearly eight months of closure.

A crowd of smiling visitors was welcomed by Disney characters dancing to the sound of joyful music.

“Amazing,” said Debbie Tater. The Delaware resident travelled from the United States to visit her family, including her daughter and two granddaughters, who live in France and whom she hadn't seen for a year and a half.

“Happiest place on earth,” she said, with tears in her eyes.

“We couldn't miss the reopening,” said Elodie Piedfort, from Haute-Loire region in central France. “Because I'm a nurse it's been a very difficult year and being here, together with my son, is great. And the reopening, moving on is great as well.”

Visitors must wear masks inside the park and other measures are in place, including a cap on visitor numbers to ensure distancing.

Pauline Baudouin, a Disney fan from Angouleme in western France, said: “We were missing the magic, because it was already a complicated period and we needed to recharge our batteries in this magical world.”

Prime Minister Jean Castex said Wednesday that France is returning to “a form of normal life again,” as he announced that people won't have to wear masks outdoors any more, except in crowded places.

The government confirmed children can remove masks in school playgrounds - yet they remain compulsory in class for those aged 6 and above.

On Thursday, Health Minister Olivier Veran said night clubs will be able to reopen in July under strict regulations - a first since the France's initial lockdown in March last year,

The French tourist industry hopes to rebound over the summer as the country welcomes foreign visitors again - on condition they have received one of the four EU-approved vaccines. Travelers are banned from 16 countries, including India, South Africa and Brazil, that are wrestling with virus surges and worrisome variants.

France started gradually reopening its economy last month. Monuments and museums, including major sites like the Louvre and Versailles, are open, as well as hotels, cafes and restaurants.

Tourists will still have to wait for the Eiffel Tower, set to reopen on July 16 after major renovation work.

The government said the easing of restrictions is due to a drop in daily infections and to a vaccination campaign that has seen more than 59% of France's adult population receive at least one shot. The country opened this week vaccination to those aged 12 to 18.