'Get Back' series dispels, and confirms, some Beatle myths 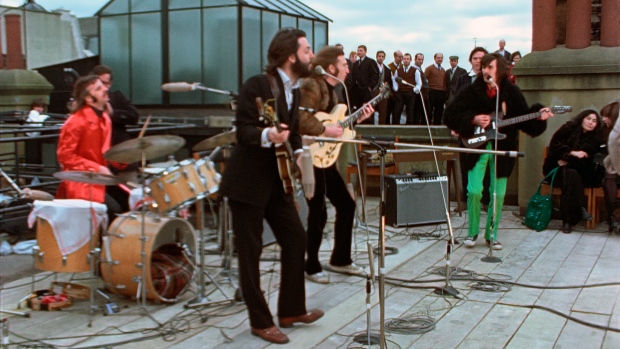 This image released by Disney+ shows, from left, Ringo Starr, Paul McCartney, John Lennon and George Harrison, with Yoko Ono, seated right, in a scene from the nearly 8-hour Peter Jackson-produced documentary "Get Back," airing over three days starting Thanksgiving. (Disney+ via AP)

NEW YORK (AP) - For 50 years, the fixed narrative had the Beatles' “Let it Be” recording session as a miserable experience with a band where members were sick of each other, sick of their work and in the process of breaking up.

The nearly 8-hour, Peter Jackson-produced documentary culled from film and recording outtakes of those sessions instead reveal a self-aware band with a rare connection and work ethic that still knew how to have fun - yet was also in the process of breaking up.

The “Get Back” series unspools over three days starting Thanksgiving on Disney+.

Produced by a Beatlemaniac for fellow Beatlemaniacs, it can be an exhausting experience for those not in the club. But the club is pretty big. Beyond the treats it offers fans, “Get Back” is a fly-on-the-wall look at the creative process of a band still popular a half-century after it ceased existence.

Jackson, the Academy Award-winning maker of the “Lord of the Rings” series, was discussing another project with the Beatles when he inquired about what happened to all the outtakes of director Michael Lindsay-Hogg's 1970 “Let it Be” film.

Nearly 60 hours of film taken over three weeks existed, mostly unseen, and the band had been considering what to do with it. Jackson took that material, as well as 150 hours of audio recordings, and spent four years building a story.

He approached with the fear that it might be a depressing slog.

Lindsay-Hogg's film is viewed as a chronicle of the band's demise - unfairly, in Jackson's view - because it was released shortly after the break-up was announced. Individual Beatles reinforced the notion with negative comments about the experience, where they had given themselves a tight deadline to write and record new material in preparation of a live show, with cameras following it all.

Oh, there's conflict. History overshadows the enjoyable moments revealed in the outtakes, like John Lennon singing “Two of Us” as a Bob Dylan impersonator, or he and Paul McCartney challenging each other to a run-through without moving their lips. Jackson restores the balance.

“The connection was incredible,” drummer Ringo Starr recalled in a recent Zoom interview. “I'm an only child (but) I had three brothers. And we looked out for each other. We looked after each other. We had a few rows with each other - that's what people do. But musically, every time we would count in - one, two, three, four - we were into being the best we could be.”

Jackson follows the sessions day-by-day from their start in a cavernous film set that was eventually abandoned in favor of their familiar London recording studio, to the brief rooftop performance that was the last time the Beatles played in public.

The filmmaker is sensitive to the idea that he was brought in to “sanitize” the sessions, pointing out that “Get Back” depicts George Harrison briefly leaving the band, an event Lindsay-Hogg was not permitted to show.

That moment unfolded after a morning where Harrison watched, silently stewing, as Lennon and McCartney displayed their tight creative connection working on “Two of Us” as if the others weren't there. When a lunch break came, Harrison had something more permanent in mind.

“I'm leaving the band now,” he says, almost matter-of-factly, before walking out.

After a few days, and a couple of band meetings, Harrison was coaxed to return. The morning he does, the film shows he and Lennon reading a false newspaper report that they had come to blows, and faced off in boxing stances to mock it.

Along the way, Jackson's project dispels and reinforces pieces of conventional wisdom that has solidified through the years.

Myth No. 1: McCartney was a control freak.

Verdict: Partly true. The film shows Harrison visibly chafing at McCartney giving him and other band members instructions on how to play and cajoling them into a decision on a live concert. The band had been somewhat aimless since the 1967 death of manager Brian Epstein. McCartney had taken on the “daddy” role, and isn't entirely comfortable with it.

“I'm scared of me being the boss, and I have been for a couple of years,” he says. “I don't get any support.”

Myth No. 2: Yoko Ono broke up the Beatles.

Verdict: Not true. She's there at virtually every recording session, but mostly as a benign force sitting next to Lennon. The other Beatle spouses all show up in the studio, although not as often. At one point, McCartney even makes a prescient joke about her.

“It's going to be such an incredible comical thing in 50 years time - they broke up because Yoko sat on an amp,” he says.

The afternoon after Harrison left, the remaining Beatles clearly take out their frustration with some aggressive, atonal music, and Ono takes over his microphone - a spellbinding moment.

Myth No. 3: The Beatles had essentially turned into four solo artists, with the others as sidemen to each other's songs.

Verdict: Not true. They're constantly collaborating, seeking and taking advice. At one point, Harrison confesses to Lennon that he's been having trouble completing the line that became “attracts me like no other lover” in “Something.” Lennon suggests using a nonsense phrase - “attracts me like a cauliflower” - until something better emerges.

Through the film, viewers can see how the song “Get Back” emerged from McCartney working out a riff on the side, to he and Lennon trading lyrical suggestions and throwing out an idea to make it a song criticizing anti-immigrant sentiment, to the full band working out the arrangement. Pleased with the final result, it's Harrison who suggests immediately releasing it as a single.

“A glimpse of them working together is an enormously important artifact, not just for Beatles fans but for anybody who is creative,” said Bob Spitz, author of “The Beatles: The Biography,” published in 2005.

Myth No. 4: Filming showed the Beatles breaking up.

Verdict: Essentially true. It becomes clear that Lennon and Harrison's enthusiasm for being Beatles is waning. Lennon is clearly in love with Ono; McCartney tells Harrison and Starr that if it ever came down to a choice between her and the Beatles, Lennon would go with her.

Harrison, growing creatively, is becoming uncomfortable with his secondary role. He talks with Lennon about doing a solo album because he has enough songs written to fill his “quota” on Beatles albums for another decade. As if to prove his point, the Beatles rehearse Harrison's majestic “All Things Must Pass,” but decline to record it.

In the film, Lennon and Starr also discuss a meeting with Rolling Stones manager Allen Klein about taking over the Beatles' business, foreshadowing a bitter split with McCartney.

“The whole thing is full of mini-stories,” Jackson said.

Jackson, who had been expected to make a conventional documentary, said he was nervous taking his much longer final product back to McCartney, Starr and the families of Lennon and Harrison.

“But they came back and said, `great, don't change a thing,”' he said.

Among the priceless moments he unearthed is the joy on the Beatles' faces as they played on the studio rooftop. The film shows the whole performance, the Beatles rising to the challenge and having a great time doing it.

When the police finally end it, the band and entourage retreat to the studio and listen to a recording of what they've done.

“This is a very good dry run for something else,” says producer George Martin.