Given to Vote: Pearl Jam gets political again during hiatus 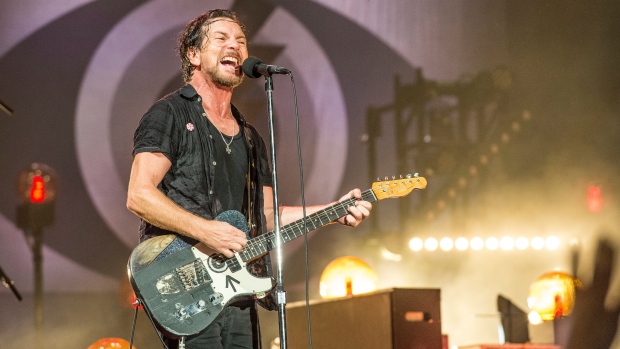 PHILADELPHIA - Stone Gossard made some serious promises this campaign season.

Pearl Jam fans who answered FaceTime calls from the rhythm guitarist got something extra for taking a vote-by-mail pledge - the latest offering from the band in a career full of activism and advocacy for political causes.

Gossard offered free tickets to the next Pearl Jam show in that person's city.

“They were really happy when I told them I'd get them into the show,” the 54-year-old Gossard with a laugh.

The band postponed its 2020 tour that was set to promote its latest album “Gigaton” and it just released its latest single “Get It Back” on streaming services. There are tentative start dates for a 2021 tour that includes a European leg but any true kickoff for a band rocking into its fourth decade still remains unknown in the pandemic.

“We're mostly just thankful that we can actually stop for a year or two and everything's going to be OK,” Gossard said. “For the majority of people out there, that reality is not the same. We're going back to touring. We're going back to making records, we're going to play `Gigaton' live. We're going to make more records and eat club sandwiches on the road. We just want to do that when it makes sense. It might still be a little bit of time.”

Gossard and Pearl Jam lead guitarist Mike McCready told The Associated Press on a recent Zoom that tour rehearsals off the band's first studio album in seven years were completed.

The band, which signs up fans for a voting pledge by texting a five-digit number, hoped the tour would wind through swing states like Pennsylvania closer to the Nov. 3 election where they could push from their stage their PJ Votes campaign - vote by mail, recruit three friends and don't wait.

Frontman Eddie Vedder posted step-by-step photos on his Instagram page on how to vote by mail. Vedder has long been a fierce critic of President Donald Trump and has cursed him out on live shows and the latest album.

“We definitely have grown to be more active, for sure, and it's become part of our identity,” Gossard said. “Everybody in the band plays a role in it at this point, for sure. We feed off each other. When one of us is successful in terms of raising awareness or generosity and really doing something that's really helpful, it really inspires all of us to continue that tradition and support that across the band.”

Pearl Jam played its first show 30 years ago on October 22, 1990 and the hiatus crimped an anniversary celebration.

“I've been playing in bands since I was 11 years old, so I've always wanted this, to be in a band that was successful,” McCready said. “I never thought it was going to happen because coming from Seattle, we were a city that was very much overlooked by a lot of fans. They'd go to Portland or they'd fly out to Vancouver. What about us here?”

Pearl Jam performed during the “All In WA: A Concert for COVID-19 Relief” livestream concert and plans to satiate fans with the release Thursday of an April 29, 2016, show from Philadelphia when it played for only the second time its debut album “10” from beginning to end on a night a banner was raised to the rafters celebrating 10 South Philadelphia sellouts.

The stream is available Thursday for the newly mixed 32-song, three-hour-set available on nugs.net for $14.99, with a portion of each ticket going to support the work of Pearl Jam's Vitalogy Foundation.

McCready and Gossard said Philadelphia has long been the home of Pearl Jam's most fervent supporters.

“The level of engagement we get from our fans there is kind of unprecedented,” Gossard said. “To talk to folks that took the pledge and are really into it and really strategic about their own votes and how they're doing it and why they're doing it has been inspiring.”

The band targeted Pennsylvania because the battleground state plays a central role in the contest between Trump and former Vice-President Joe Biden. Voter registration in Pennsylvania has already hit a record high in this cycle.

Gossard says his campaign promise of a few free tickets will be kept - as long their fans take the pledge.

“We want to make sure that everybody participates, really,” he said. “I'm hoping for a shift in the national direction.”