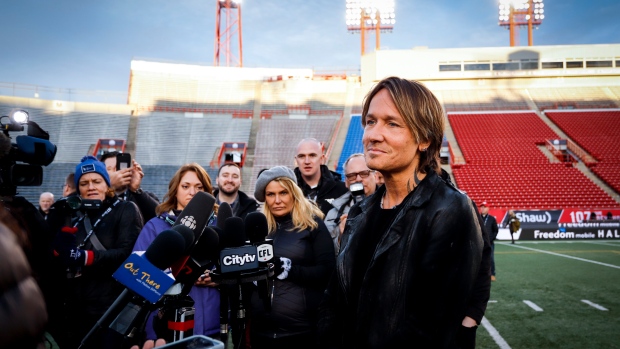 CALGARY - Country music star Keith Urban is about to experience the Canadian Football League for the first time.

The four-time Grammy winner is the halftime performer for Sunday's 107th Grey Cup in Calgary between the Hamilton Tiger-Cats and Winnipeg Blue Bombers.

“Having never seen a CFL game before, I'm looking forward to seeing one,” Urban said Saturday at McMahon Stadium. “What a crash course right? To come and see the Grey Cup.”

Urban has sold more than 20 million albums, six of which have reached No. 1.

Urban has performed at a Nashville Predators games and at Philadelphia's Lincoln Financial Field for the NHL Stadium Series game between the Flyers and the Pittsburgh Penguins in February.

Born in New Zealand and raised in Australia, he's familiar with NFL football having attended a few Tennessee Titans games

The 52-year-old singer-songwriter says it's a different vibe performing a few quick songs at a game where he's not primarily who people have come to see.

“I never know what to expect in a situation like this,” Urban said. “It's a bit like going to a festival where you don't know how many people there know who you are, what you do, have never seen you before.

“But it's maybe a little harder because it's a sporting event. I always come out with the attitude that everyone is standing there doing this,” he said, folding his arms in front of him. “'What do you do? What's your business?'

“I want to keep everybody warm and up and motivated with hopefully songs most everyone knows.

Urban is familiar with Calgary having performed in the city earlier in his career, including the 2014 Calgary Stampede.

“Calgary's got such a huge country fan base,” Urban said. “My music certainly transcends a lot of that as well, goes outside of it a bit.

“It feels like a second home, it really does Canada in general, because I started touring here so early in my career.

“I could tell from when we started playing little clubs that what I was doing, everybody got it. I felt like I was back in Australia.”

This report by The Canadian Press was first published Nov. 23, 2019.