'Harry Potter' book with author's notes up for auction 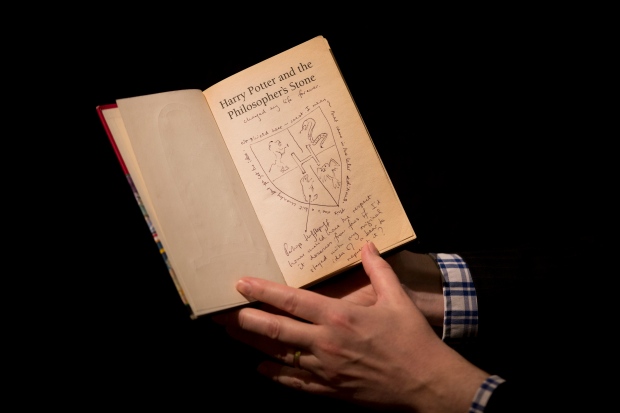 Dr. Philip Errington of Sotheby's poses for photographers with a first edition copy of the first Harry Potter book, containing annotations and illustrations by author J.K. Rowling, in London, on Monday, May 20, 2013. (AP Photo/Matt Dunham)

LONDON -- A first edition copy of "Harry Potter and the Philosopher's Stone" that contains author J.K. Rowling's notes and original illustrations is going on sale at a charity auction.

It "was invented in a small hotel in Manchester after a row with my then boyfriend. I had been pondering the things that hold a society together, cause it to congregate and signify its particular character and I knew I needed a sport," she wrote.

Rowling also drew illustrations in the book, including a sleeping baby Harry on a door step and an Albus Dumbledore Chocolate Frog card.

The copy will be sold Tuesday at Sotheby's London as part of an auction jointly organized with the writers' association English PEN.

The group, a charity that promotes the freedom to read and write, asked 50 acclaimed authors to "scribble second thoughts, marginalia or drawings" on a first-edition copy of one of their books.