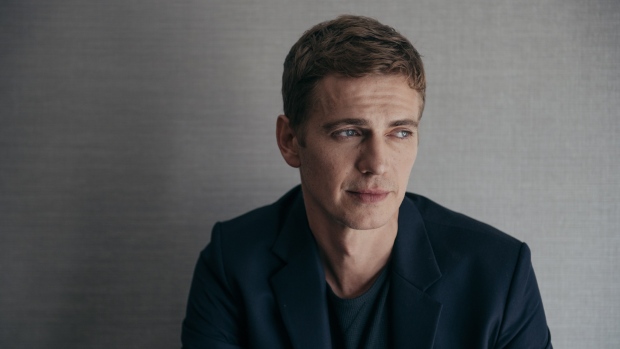 Actor Hayden Christensen poses for a portrait while promoting his new movie, Little Italy, in Toronto on Wednesday, August 22, 2018. THE CANADIAN PRESS/Galit Rodan

TORONTO -- Being a quarter Italian and a foodie with his own pizza oven, Canadian actor Hayden Christensen fancied himself a decent pie maker before filming his new romantic comedy "Little Italy."

But he wanted to brush up his skills to play the part of an Italian cook, so he took lessons and went incognito at a pizzeria in Toronto's Little Italy neighbourhood, where the film was set and shot.

"I wasn't really working there, although they did let me make pizzas for paying customers, and I did deliver a pizza," the Vancouver-born star, who gained international fame playing Anakin Skywalker in the "Star Wars" franchise, said in an interview.

"(The customers) didn't know who I was. I had a baseball cap on and my apron from the kitchen. I looked the part. So I was there with ... the debit machine, I got a 20 per cent tip. I was on time, the pizza was still hot. It went well."

In theatres Friday, the film stars Christensen and American actress Emma Roberts as lifelong friends whose budding romance is opposed by their feuding families who run rival pizza shops in the city's Little Italy neighbourhood.

For Christensen, who grew up in Thornhill, Ont., and has a farm in Uxbridge, Ont., the film allowed him to work close to home.

"Just getting to make a movie in Toronto that's set in Toronto was very meaningful to me and definitely part of the appeal off the bat," said Christensen, who got a Golden Globe nomination for his supporting role in the 2001 film "Life as a House."

"I've worked here before, lots, but you're usually doubling the city for another location. And this movie is a bit of a love letter to Toronto and certainly to the Italian community here."

Christensen felt a connection with that community and its culture having Italian relatives including his grandmother, who he said makes a mean eggplant parmesan and fostered his love of cooking.

"I'm a purist when it comes to pizza, so I like just the very simple cheese pizza, like a Margherita-style pizza with some fresh basil," Christensen said.

"But if I had to put toppings on the pizza, I have made pizza before with pineapple, prosciutto and some jalapeno and it was pretty good."

The film shoot drew in some local stars, including Toronto Raptors guard Kyle Lowry and Blue Jays starting pitcher Marcus Stroman, to whom Christensen got to throw the first pitch in the team's game earlier this week.

"I was nervous -- I threw the first pitch, I got it across the plate, I was very pleased with myself," said Christensen, noting he used to go to Blue Jays games as a kid.

Christensen said he tries to get back to his Uxbridge farm as often as possible, where he used to have sheep, pigs and chickens until he had his daughter with his now-ex, actress Rachel Bilson. The animals got to be too much to look after while focusing on parenting, so they found good homes for them, he said.

"It's a creative endeavour for me as well," he said of the farm. "I've been restoring this old century home for some years now and am pretty much done with it. It's been a very fulfilling experience being out in the country.

"That's part of the fun being out there, is just getting your hands dirty and building stuff. It's a great escape for me."