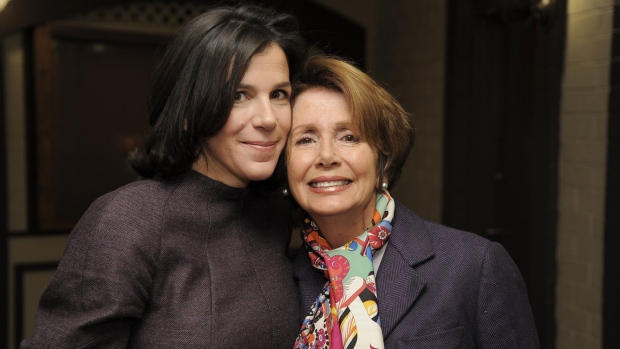 FILE - Alexandra Pelosi, left, director of HBO Documentary Films' "Fall to Grace," poses with her mother Nancy Pelosi before a screening of the film at the 2013 Sundance Film Festival in Park City, Utah on Jan. 18, 2013. A documentary on House Speaker Nancy Pelosi’s life and groundbreaking political career, shot and edited by her daughter, will debut on HBO next month. Alexandra Pelosi’s “Pelosi in the House” will premiere on Dec. 13 and will include footage shot during the January 6 insurrection. (Photo by Chris Pizzello/Invision/AP, File)

LOS ANGELES (AP) — A documentary on House Speaker Nancy Pelosi’s life and groundbreaking political career, shot and edited by her daughter, will debut on HBO next month.

Alexandra Pelosi’s “Pelosi in the House” will premiere Dec. 13 and will include footage shot during the Jan. 6 insurrection. Some of that footage, including moments when Nancy Pelos i was helping direct the government’s response as the U.S. Capitol was under attack, has been seen as part of a House investigation.

The film will arrive three weeks before Pelosi’s tenure as House speaker ends and Republicans resume control over the House of Representatives. Pelosi has said she will not seek a leadership post, ending a two-decade run of helping steer the Democrats' agenda in Congress.

HBO says the documentary will use footage shot over three decades to chart Pelosi’s career including her election to Congress in 1987 and her ascension to House speaker in 2007, becoming the first woman to lead the chamber. The documentary also includes video of Pelosi at home and working during pivotal moments of her career.

#PelosiInTheHouseHBO, an @HBO original documentary that offers a candid, behind-the-scenes chronicle of the life and career of the first female Speaker of the House, told through the lens of her daughter, filmmaker Alexandra Pelosi, premieres December 13 on @HBOMax. pic.twitter.com/Q0x0Z6YiVE

HBO did not say how much the documentary would feature Paul Pelosi, who has been married to Nancy Pelosi for 59 years. The wealthy investor is recovering from a brutal hammer attack by an intruder who broke into their San Francisco home in October calling out “Where’s Nancy,” the latest in a line of threatening behavior directed at her.

Alexandra Pelosi is an Emmy-nominated documentary filmmaker who was with her mother filming during the Jan. 6 insurrection. She’s specialized in political documentaries, earning four Emmy nominations for her 2002 film “Journeys with George” about George W. Bush’s 2000 presidential campaign.