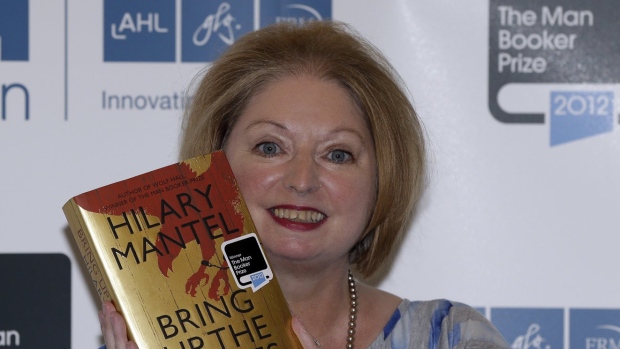 FILE - Hilary Mantel, winner of the Man Booker Prize for Fiction, poses with a copy of her book 'Bring up the Bodies', shortly after the award ceremony in central London, on Oct. 16, 2012. Mantel, the Booker Prize-winning author of the acclaimed “Wolf Hall” saga, has died, publisher HarperCollins said Friday Sept. 23, 2022. She was 70. (AP Photo/Lefteris Pitarakis, File)

LONDON (AP) — Hilary Mantel, the Booker Prize-winning author who turned Tudor power politics into page-turning fiction in the acclaimed “Wolf Hall” trilogy of historical novels, has died, her publisher said Friday. She was 70.

Mantel died “suddenly yet peacefully” on Thursday surrounded by close family and friends after suffering a stroke, publisher HarperCollins said.

Mantel is credited with reenergizing historical fiction with “Wolf Hall” and two sequels about the 16th-century English powerbroker Thomas Cromwell, right-hand man to King Henry VIII — and in Mantel’s hands, the charismatic antihero of a bloody, high-stakes political drama.

The publisher said Mantel was “one of the greatest English novelists of this century."

“Her beloved works are considered modern classics. She will be greatly missed," it said in a statement.

Mantel won the prestigious Booker Prize for fiction twice, for “Wolf Hall” in 2009 and its sequel “Bring Up the Bodies” in 2012. Both were adapted for the stage and television.

The trilogy's final instalment, “The Mirror and the Light,” was published in 2020.

“Only last month I sat with her on a sunny afternoon in Devon, while she talked excitedly about the new novel she had embarked on,” he said. “That we won’t have the pleasure of any more of her words is unbearable. What we do have is a body of work that will be read for generations.”

Born in Derbyshire in central England in 1952, Mantel attended a convent school, then studied at the London School of Economics and Sheffield University. She worked as a social worker at a geriatric hospital, an experience she drew on for her first two novels, “Every Day Is Mother’s Day,” published in 1985, and “Vacant Possession,” which followed the next year.

In the 1970s and 1980s she lived in Botswana and Saudi Arabia with her husband, Gerald McEwen, a geologist. She drew on her time in Saudi Arabia for the 1988 novel "Eight Months on Ghazzah Street.”

Mantel had been a published novelist for almost 25 years when her first book about Cromwell made her a literary superstar. Before “Wolf Hall,” she was the critically acclaimed but modestly selling author of novels on subjects ranging from the French Revolution (“A Place of Greater Safety”) to the life of a psychic medium (“Beyond Black”).

“For most of my career I wrote about odd and marginal people,” Mantel said in 2017. “They were psychic. Or religious. Or institutionalized. Or social workers. Or French. My readers were a small and select band, until I decided to march on to the middle ground of English history and plant a flag.”

A self-made man who rose from poverty to power, Cromwell was an architect of the Reformation who helped King Henry VIII realize his desire to divorce Catherine of Aragon and marry Anne Boleyn — and later, to be rid of Boleyn so he could marry Jane Seymour, the third of what would be Henry's six wives.

The Vatican’s refusal to annul Henry’s first marriage led the monarch to reject the authority of the pope and install himself as head of the Church of England.

The dramatic period saw England transformed from a Roman Catholic to a Protestant nation, from medieval kingdom to emerging modern state, and it has inspired countless books, films and television series, from “A Man for All Seasons” to “The Tudors.”

But Mantel managed to make the well-known story exciting and suspenseful.

“I’m very keen on the idea that a historical novel should be written pointing forward,” she told The Associated Press in 2009. “Remember that the people you are following didn’t know the end of their own story. So they were going forward day by day, pushed and jostled by circumstances, doing the best they could, but walking in the dark, essentially."

Mantel also turned a sharp eye to Britain's modern-day royalty. A 2013 lecture in which she described the former Kate Middleton, wife of Prince William, as a “shop-window mannequin, with no personality of her own” drew the ire of the British tabloid press.

Mantel said she wasn't talking about the duchess herself but rather describing a view of Kate constructed by the press and public opinion. The author nonetheless received criticism from then-Prime Minister David Cameron, among others.

Right-wing commentators also took issue with a short story entitled “The Assassination of Margaret Thatcher,” which imagined an attack on the former Conservative leader. It was published in 2014, the same year Queen Elizabeth II made Mantel a dame, the female equivalent of a knight.

Mantel remained politically outspoken. An opponent of Brexit, she said in 2021 that she hoped to gain Irish citizenship and become “a European again.”

In addition to her fiction, Mantel wrote a 2003 memoir, “Giving Up the Ghost,” that chronicled years of ill-health, including long-undiagnosed endometriosis, surgery for which left her infertile.

She once said the years of illness wrecked her dream of becoming a lawyer but made her a writer.

“We will miss her immeasurably, but as a shining light for writers and readers she leaves an extraordinary legacy,” he said.

Mantel is survived by her husband.