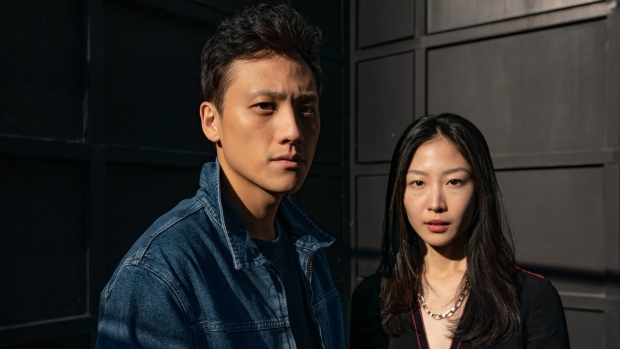 Director Anthony Shim and actress Choi Seung-yoon, of the film "Riceboy Sleeps," are photographed in Toronto on Friday, Sept. 9, 2022. Freshly anointed as a filmmaker to watch by the Toronto International Film Festival, Anthony Shim brings his celebrated mother-son drama “Riceboy Sleeps” to a hometown crowd at the Vancouver International Film Festival this week. THE CANADIAN PRESS/Alex Lupul

Shim’s portrait of a Korean family who face unresolved trauma and racism in Canada won TIFF’s prestigious $20,000 Platform Prize earlier this month, just as it launched a festival circuit run that also takes it to the Calgary International Film Festival on Tuesday and Friday.

While at TIFF, Shim noted that much of the film’s portrayal of coming-of-age and parental anguish is inspired by his own experiences growing up in British Columbia in the 1990s, but several plot turns have been invented for dramatic effect.

The bilingual story centres on the young widow So-young, played by Korean actress Choi Seung-yoon, who seeks a fresh start in Canada with her son Dong-hyun, played by Dohyun Noel Hwang as a child and Ethan Hwang as a teenager.

Cultural barriers emerge immediately, with Dong-hyun called names on the playground and So-young baffled by the school’s indifference.

Like his immigrant characters, Shim says he struggled as a youngster to understand the casual racism he faced. As he grew up, he gradually realized that schoolyard taunts continued to affect him as an adult.

“I've heard every name you can imagine. But it was kind of common back then. Name-calling is a part of being kids, I guess,” says Shim, who moved to British Columbia from Seoul in 1994 at age eight with his mother, father and sister.

“It wasn't until I was older that I looked back and went: Wow, that did really affect my own self-perception and the way I started to behave in my teenage years…. It was about adapting and fitting in.

"It got to a point where I started to wonder, 'Is this really me? Am I dressing this way, am I making myself look this way, and am I talking this way because this is genuinely who I am? Or am I doing my best to just fit in?'”

Shim says his family first moved to Burnaby but left a few months later for the Vancouver Island city of Duncan, where he was “the only Korean boy in school.” They then moved to Victoria, and Shim says “Riceboy Sleeps” is largely inspired by his time there. Most of the shoot took place in Pitt Meadows and Maple Ridge, on the eastern edge of Greater Vancouver.

Still, Shim says he didn’t set out to make a soul-baring portrait or use film to address buried pain: “I wanted to make a film about the Korean-Canadian immigrant experience in the way that was familiar to me.”

He drew inspiration from Barry Jenkins’ wrenching 2016 coming-of-age indie, “Moonlight,” about a young Black man in Miami struggling to find his place in the world.

"I went, 'There's a film about a specific community.’ A specific kind of people. And it's so raw and honest. And yet it can still be so universal,” he says.

“That was a big encouragement of like, ‘Oh, I think it's about time, somebody needs to make a film about the Asian male adolescent years in a way that it was like for me.'"

Shim's personal tie to “Riceboy Sleeps” was evident on the final day of TIFF when the writer-director was presented with the Platform Prize. He thanked festival programmers who “literally changed my life” and choked back tears while thanking his mother and sister, “who always believed I could do things like this.”

After its Vancouver screenings Friday and Monday, “Riceboy Sleeps” makes its international premiere in front of a Korean audience at the Busan International Film Festival, which runs Oct. 5 to 14.

The overseas debut will offer another emotional benchmark for the film, predicts Shim, who shot the latter portion in South Korea. Locations included the small farming village Woniljeon-ri where his grandfather grew up and many of his distant relatives still live.

"There's a special place in my heart for that city (Busan) as well — my aunt lives there and so I've been going there since I was a kid,” Shim says.

“Vancouver and then Busan – we get to have these screenings for all the cast and crew that we worked with, and in these two countries. It's all working out."

“Riceboy Sleeps” is set for a theatrical release next year in Canada and the United States.